Whale buys $170 million in Bitcoin after dip below $50K

The third-largest Bitcoin whale has added another 408 Bitcoins to a total holding of 112,000 in their wallet. The wallet now holds $4.9 billion worth of Bitcoin. Analysts have labeled this purchase as “buying the dip.”

When Bitcoin crossed $60,000, large wallet investors sold substantial chunks of their BTC holdings. Pseudonymous cryptocurrency analyst on CryptoQuant, @venturefounder, observed that the whale wallet made seven purchases for a total of $17.7 million since the latest Bitcoin price drop.

This whale address has been in net accumulation trend since 2019. pic.twitter.com/Xo4nyXObdf

The movement of Bitcoins between different categories of holders is an ideal indicator to predict a price rally. In the latest issue of “The Bitcoin Forecast,” a biweekly Bitcoin newsletter, on-chain analyst Willy Woo has introduced the “Bitcoin HODLer Strength” chart.

The chart represents three categories of Bitcoin holders (strong, medium and weak) depending on the duration for which they held Bitcoin in their wallet. Woo tracks the relative strength of each category with respect to the other, as Bitcoins move between them.

When strong holders are at their peak, with medium and weak holders at a low, Woo considers it the perfect setup for a Bitcoin price rally.

The chart below shows that the current setup is shaping the above structure, signaling an upcoming rally.

Bitcoin relative strength of the strong, medium and weak holders by Willy Woo

Based on data from Ecoinometrics, an on-chain and macro analysis provider, wallet addresses holding less than 1 Bitcoin have been resilient to the recent price changes in the asset. BTC accumulation by these addresses is onward and upward, catching up to the level when the price crossed $64,000 in April 2021.

On-chain accumulation vs. price level is considered as a key indicator of a rally in the asset. 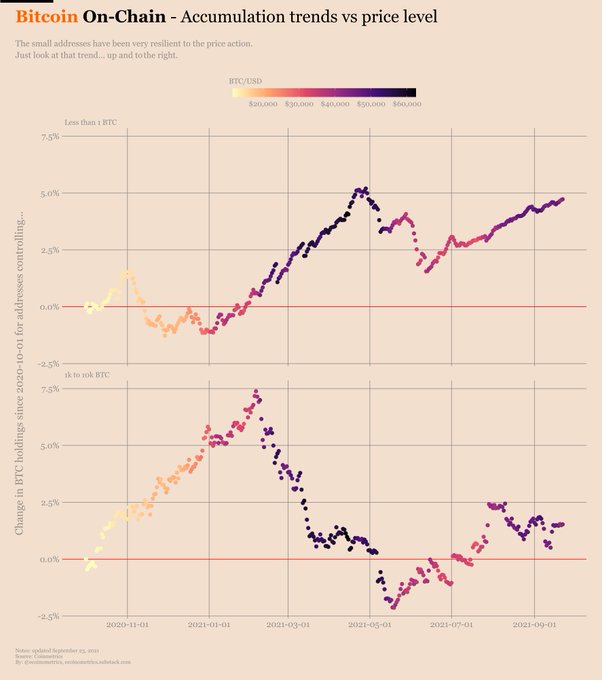 Dr. Jeff Ross, founder and CEO of Vailshire Capital, recently shared his opinion on “red September,” stating that a wave of selling from traders is behind us.

#Bitcoin technical update: Nearing the end of another volatile, red September… as expected.

Opinion: Wave of short-term selling–from traders who believe the 2021 bull market is over–is nearing an end. Then onwards & upwards! pic.twitter.com/BB3p0T7EJS

FXStreet analysts have predicted that Bitcoin price will climb higher if the asset stays above the monthly open, $46,461.