Some of the most popular stocks in the market include SentinelOne and Bill.com, each trading at price-to-sales ratios of more than 100, making them among the most expensive out there.

However, the great Warren Buffett once said: “For the investor, a too-high purchase price for the stock of an excellent company can undo the effects of a subsequent decade of favorable business developments.”

In other words, it doesn’t matter how popular or fantastic a business is; if you pay too much for the stock, your returns may disappoint you. Visual search engine Pinterest (NYSE: PINS) has been beaten down since its last reported earnings. Here are three reasons why Pinterest is a buy today.

1. Monetization is in the early stages

Pinterest is by no means a small platform; there are currently 454 million monthly active users (MAUs) worldwide, and it is a truly global business with 80% of its MAUs from outside of the U.S. The company is lumped in with other social media platforms like Facebook and Twitter, but Pinterest describes itself as a visual search engine. 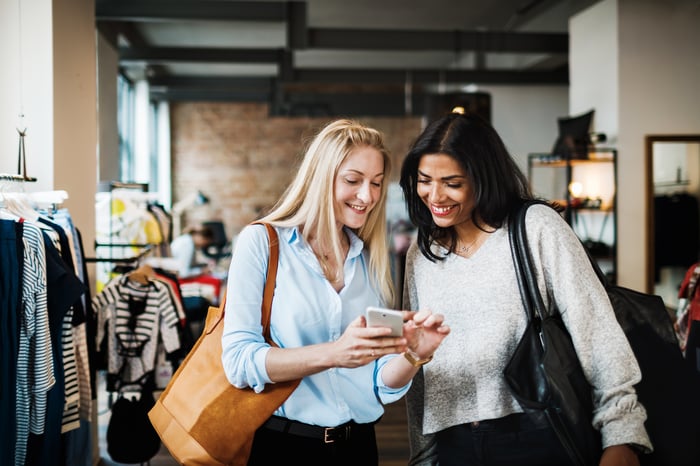 Its users come to Pinterest looking to be “inspired,” searching for decoration ideas, recipes, travel destinations, and anything else where a user can take an idea in their head and find a visual to pair it with.

The company only just recently began focusing on implementing tools to monetize the traffic on its platform, rolling out several features that are still new or not yet fully launched, including ad tools, e-commerce integrations with partners like Shopify, video Pins, and the ability to tag products in Pins.

Pinterest is working to generate advertising revenue by blurring the lines between e-commerce and social media, where users find a great Pin and have the option to buy a product directly from it.

Facebook’s average user created $10.12 in revenue for its Q2 2021, more than seven times Pinterest (and Facebook continues to improve its monetization), so there appears to be considerable room for Pinterest to grow its revenue per user over time.

2. The financials are already strong

Pinterest has seen strong revenue growth from the combination of attracting more users and generating more revenue from each. Total revenue grew 125% year over year in Q2 2021, to $613 million.

A rapidly growing business is often unprofitable because the company reinvests everything back into itself for growth, but that isn’t the case with Pinterest. In the same quarter that revenue grew 125%, Pinterest posted a positive EBITDA of $178 million and has been EBITDA-positive over the past four quarters.

As Pinterest continues to grow revenue faster than its expenses, this should result in accelerated profit growth. Investors should monitor the company’s bottom line to see this through over coming quarters.

3. The stock is discounted

Pinterest is currently expected to earn $2.6 billion in revenue for the full 2021 year, a 54% increase over 2020. The stock’s price-to-sales ratio is currently 14. Let’s compare that to Bill.com, mentioned at the top of the article.

Bill.com just announced its most recent quarter, where it grew revenue 86% year over year, and the company posted a net loss for the quarter. Bill.com is in “growth mode,” so we need to acknowledge its strong 74% profit margins, but does it deserve a valuation that is many multiples higher than Pinterest? Let’s remember that Pinterest just grew 125% and is already profitable.

The stock market doesn’t always make a lot of sense in the short term, where sentiment more than anything dictates whether stocks go up or down. Fundamentals matter more over the long term, and Pinterest has the growth and profitability to eventually rebound from where it currently trades.

Going against the grain and not buying the stocks that everyone loves can feel uncomfortable, and that’s OK. Buying quality companies at a discount often proves the more lucrative strategy over time, and Pinterest could be the latest example of that.

10 stocks we like better than Pinterest
When our award-winning analyst team has a stock tip, it can pay to listen. After all, the newsletter they have run for over a decade, Motley Fool Stock Advisor, has tripled the market.*

They just revealed what they believe are the ten best stocks for investors to buy right now… and Pinterest wasn’t one of them! That’s right — they think these 10 stocks are even better buys.