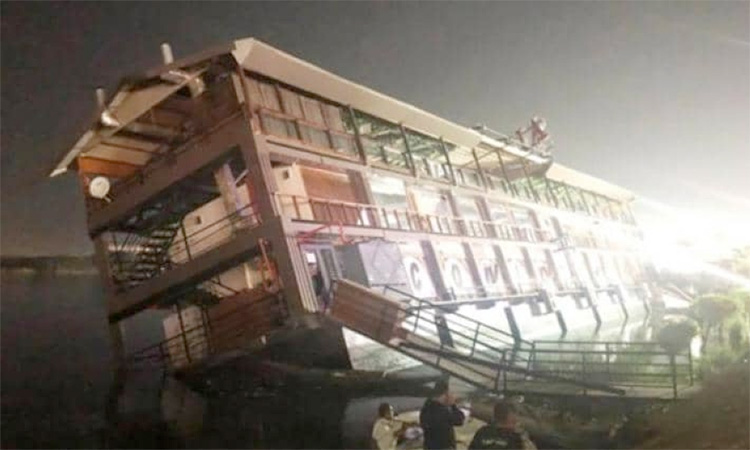 A number of engineers had been assigned to save the ship before it completely sank.

A tourist boat sank in the River Nile in the city of Mansoura, north of Cairo, on Thursday evening. The boat was carrying hundreds of people, who were attending three separate parties held on it. It was reported that dozens of people sustained injuries due to the stampede caused by a state of panic as they were escaping before it sank.

The Egyptian media reported that the Daqahlia Security Directorate received a report that a floating restaurant and café had been flooded in the area of Al-Mashaya Al Sofliya Street in Mansoura.

It explained that a three-storey floating boat drifted aground on one side in the Nile, and a large number of citizens were injured during the stampede and escape from the boat before it sank. The injured were transferred to the emergency hospital in Mansoura, the Egyptian media added.

Eyewitnesses confirmed that  two birthday parties and a wedding party were being celebrated on the second and third floors of the boat, and there were more than 500 people in it. When the guests felt the boat shaking, crackling, and tilting to one side, they rushed from it trying to escape before it sank, according to the Egyptian newspaper, “Al-Masry Al-Youm”.

A number of engineers had been assigned to save the ship before it completely sank. Water pumps were used to suck large quantities of water from inside the ship and a winch was used to pull it to prevent it from completely sinking into the Nile. https://www.youtube.com/watch?v=VQ9lHSMJayE

The Disastrous Voyage Of The World’s First Crypto Cruise ship