A Bitcoin (BTC) price metric which made BTC “look seriously cheap” at $56,000 is now in rare oversold territory.

Advanced NVT calculates whether Bitcoin is overbought or oversold at a certain price point using market capitalization and network volume.

In late November, when BTC/USD had already fallen to $56,000, Swift suggested that a bounce was due.

The metric subsequently continued to fall in line with spot price thanks to last Friday’s liquidation cascade. A possible plus, however, lies in the return of “oversold” cues from NVT — something which has only occurred six times since 2015.

“A lot of fear in the market currently, which makes me bullish. Lots of indicators suggest we are near a bottom,” he said.

“Advanced NVT Signal looks at price relative to onchain transactions. It has only been this oversold a few times before, each time resulting in a strong bounce.” 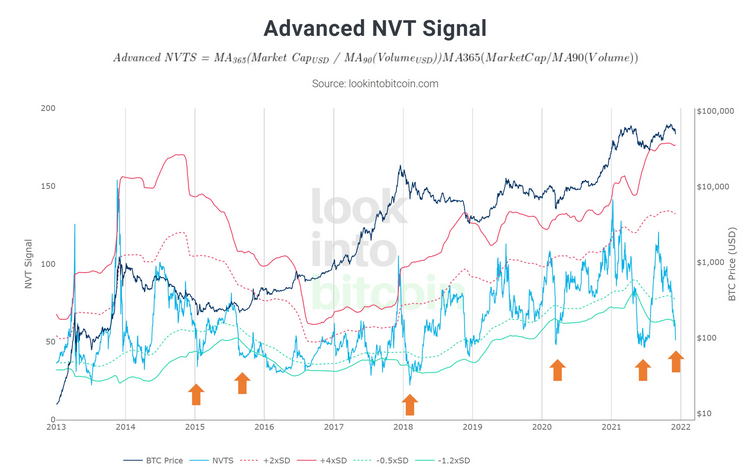 The strength of such a bounce nonetheless may have already faded, with Bitcoin reversing after around 6% overnight gains to $51,500 on Bitstamp.

Trader to BTC buyers: Wait a week to “avoid chop”

At press time, $51,000 formed a focus, amid heavy indications from commentators that fresh downside could soon enter.

“Buy in low to mid 40’s. Not get trapped,” trader and analyst Pentoshi advised Twitter followers.

As Cointelegraph reported Monday, meanwhile, there are plenty of reasons to separate spot price action from underlying strength in Bitcoin.

Among them is all-time high hash rate, along with a broad lack of selling — smaller hodlers, by contrast, have been adding to their positions throughout the past week.

Only whales appear to be hedging their bets, as evidenced by exchange flow data.