These 5 Cryptocurrencies Made the Biggest Gains in October 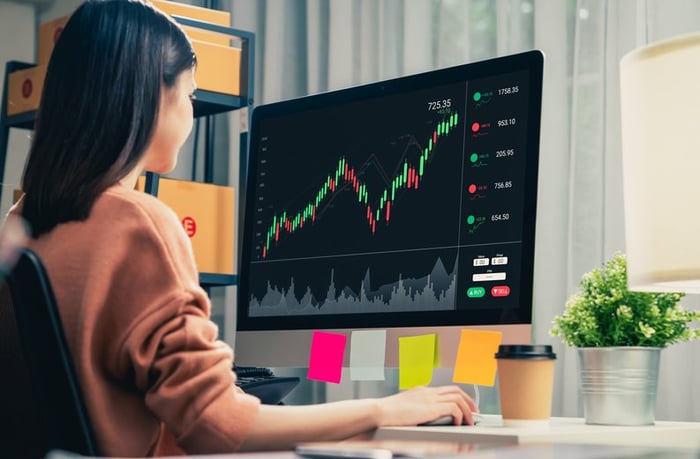 For some investors, the potential to make huge returns is a major attraction of cryptocurrency investing. And with monthly gains of 120% or more, it’s easy to see the temptation. But chasing those high returns can be a risky way to invest. With over 13,000 cryptocurrencies to choose from, it has never been more important to focus on a coin’s fundamentals and long-term prospects.

Often, the cryptocurrencies that see the really huge monthly gains are meme coins or highly speculative investments. That’s why we’ve restricted our top gainers list to those that are in the top 100 cryptocurrencies by market capitalization, using CoinMarketCap data. Even then, there’s a mix of speculative tokens and those that might perform well in the long term. And some are not available from top U.S. cryptocurrency exchanges.

Let’s take a look at which coins gained the most in October and why.

Shiba Inu is one of the many pet coins that followed in the wake of Dogecoin’s (DOGE) success. This month, it shot into the top 10 cryptocurrencies by market cap following a tweet from Tesla CEO Elon Musk with a picture of his Shiba Inu puppy. Even though Musk says he doesn’t own any SHIB and has never promoted it, the cute pic lit a fire under the token.

Since then, a campaign on Change.org to get Shiba Inu listed with popular crypto broker Robinhood has gained almost 400,000 signatures. Speculation on a SHIB listing has pushed its price through the roof.

Secret is a privacy-focused cryptocurrency that also has smart contract capabilities. Its price rose in anticipation of its Supernova protocol update, which will connect its network to Cosmos (ATOM). Cosmos is an interoperability cryptocurrency that helps blockchains talk to each other, so this integration will allow the Secret Network to position itself as a crypto-wide privacy hub.

Fantom is one of several Ethereum (ETH) alternatives that has posted huge gains in recent months. It held its developer conference in Abu Dhabi at the end of October and also announced a couple of interesting partnerships. Decentralized finance (DeFi) yield aggregator Yearn Finance went live on Fantom at the start of the month. And crypto-trading platform Open Ocean also announced a Fantom integration.

Harmony was one of our altcoins to watch for October after it announced a $300 million fund to attract developers. Like Fantom, this month it also hosted a big conference and announced key integrations with other platforms.

Harmony aims to solve some of the scalability and interoperability issues faced by the Ethereum network. It is faster, boasts lower fees, and can bridge to other crypto networks.

Curve is a popular decentralized exchange (DEX) that specializes in stablecoins. Unlike centralized exchanges that need a platform to facilitate trades, DEXs allow users to swap coins directly. Stablecoins are cryptos whose price is pegged to a commodity like the U.S. dollar or gold.

Curve reached an all-time high this month in spite of upcoming stablecoin regulation. This is because, according to Crypto Briefing, over 89% of CRV tokens have already been tied up or committed to various DeFi projects, leaving a limited supply. CRV tokens are a popular way for investors to earn interest through DeFi initiatives.

Be cautious about chasing the highs

Cryptocurrencies can be volatile and unpredictable investments, which is why it’s important to only invest money you can afford to lose. There are so many factors we can’t control — as demonstrated by the fact that our top performer’s success this month is down to a tweet from Elon Musk and an online petition.

That’s why it’s less risky to look for coins you think might gain the most over the coming five or 10 years instead of trying to predict what might happen next month. It isn’t easy because there’s a lot of misinformation out there and very little regulation to help you trust what you read. Unfortunately, there’s a good chance that many of the coins we see today won’t survive. But by focusing on the fundamentals — such as a project’s management team, strategic direction, competition, the problem it plans to solve, and how it plans to solve it — you can minimize your risks.

These five coins may have seen huge returns this month, and watching the top gainers is often a good way to understand crypto market trends. But big rewards this month don’t necessarily mean big rewards in the future — don’t let those high numbers stop you from doing your own due diligence.

Buy and sell cryptocurrencies on an expert-picked exchange

There are hundreds of platforms around the world that are waiting to give you access to thousands of cryptocurrencies. And to find the one that’s right for you, you’ll need to decide what features matter most to you.

To help you get started, our independent experts have sifted through the options to bring you some of our best cryptocurrency exchanges for 2021. Check out the list here and get started on your crypto journey, today.