South Florida’s go-big approach to Formula One ready to be on display. 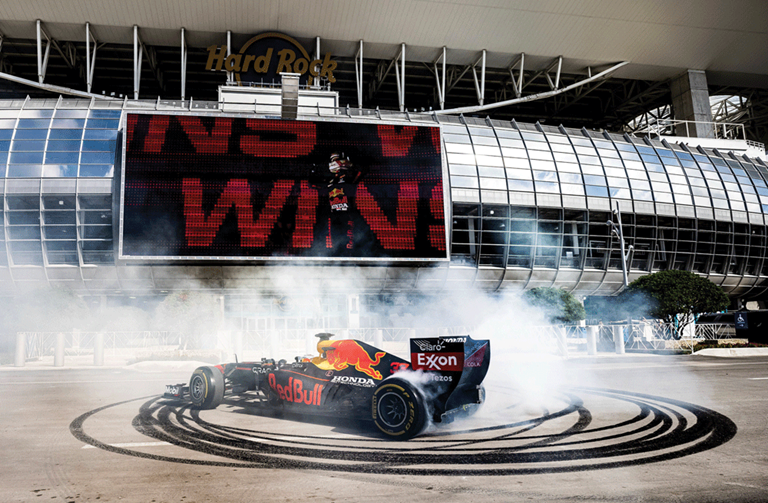 Hard Rock Stadium will be all about horsepower and high-end amenities when the Miami Grand Prix gets underway.Red Bull Racing

When Dolphins owner Stephen Ross first pursued a Formula One race in 2017, the vision was to match the glitz and glamour of Miami with the global power and prestige of F1, creating an in-demand event that would rival Super Bowl preparations and produce high prices for ticketing and hospitality.

The wait is over as the inaugural Crypto.com Miami Grand Prix gets underway this Friday through Sunday on the campus of the Dolphins’ Hard Rock Stadium. A crowd of 85,000 is expected to attend: roughly 70,000 fans and 15,000 hospitality guests, including a slew of A-list celebrities, athletes, high-net-worth individuals and sports business executives.

Organizers kept capacity lower than what could have been sold to ensure a proper fan experience with smooth ingress/egress and short lines for concessions and bathrooms. Grandstand and premium seating is gone, but a sellout has not yet been announced; general admission tickets — what’s called a campus pass — are still on sale ($500 for race day).

Given how many people want tickets, event CEO Richard Cregan said that his team has been adding seating options in recent weeks rather than declaring a sellout “to make sure we’re meeting demand all along the way … and there are options available right up until the gates open.”

SeatGeek reports that this weekend’s event is the most in-demand auto race it has ever tracked, with an average resale price of $2,414 per ticket as of last week. “The Netflix series pushed interest in F1 to the stratosphere and many Americans are eager to witness a race live for the first time,” said Chris Leyden, director of consumer strategy for SeatGeek.

McLaren Racing CEO Zak Brown told Reuters that his company is bringing 1,000 guests to Miami, the most of any team, and could have brought double that if supply allowed. Mercedes told SBJ that it will also have 1,000 guests.

“This was incredibly popular right out of the gate when they announced it last summer — our waitlist was in the tens of thousands of people putting their name in hoping to place an order,” said Keith Bruce, president of QuintEvents International and F1 Experiences, which is F1’s official ticket and travel program provider. “When you have a waitlist that long, you know the interest is incredible.”

Ross set up a separate subsidiary, South Florida Motorsports, to manage and promote the event. While financial details of Miami’s decade-long arrangement with F1 are not known, promoters typically pay low eight figures annually to the series for the right to host a race. But with the cheapest race-day tickets costing $500 and many at or over $1,000, SFM should make well into the mid-to-high eight figures, if not low nine figures, in ticket revenue this year.

The huge response has buoyed F1 and Liberty Media executives as they assess just how much the series has grown in the U.S. and whether the market can sustain multiple races. This year, the U.S. will host two F1 races, in Miami and Austin, with a third, in Las Vegas, set to join in 2023.

Sodexo Live has broken the race circuit into eight zones to provide food and beverage service to everything from general admission seating to premium areas.Sodexo Live

If there’s one over-arching theme of the race weekend, it’s South Florida luxury. While F1 has always been known as a bastion for wealth, the focus on opulence this weekend is being compared with some of F1’s most moneyed weekends, namely the Monaco Grand Prix.

At the circuit, hospitality options include the Hard Rock Beach Club, situated near Turns 11-13, which features sand, pools and concerts with a cabana package for $65,000 for 10 guests over the race weekend. The MSC Cruises yacht club will be part of a broader, man-made marina setting with dry-docked luxury boats.

F1’s famous Paddock Club hospitality area that is typically situated over team garages and the start/finish line will have 5,000 guests. Sources said a ticket to the Paddock Club typically goes for around $6,000 for most races but was sold for $9,000 for the Miami race, a 50% increase, due to the anticipated demand.

On the secondary market as of presstime, the cheapest three-day pass to the Paddock Club this weekend was $19,328, while the best for Sunday only was $14,973, according to data from TickPick. That’s higher than the average ticket price to the Super Bowl this year, $5,877, according to TickPick.

F1 Experiences is sold out of its inventory for Miami, according to Bruce, roughly evenly split between premium and regular fan experiences. That includes about 1,600 VIP hospitality clients and 1,400 fans who bought grandstand packages. One of the packages was called the Legend pass and included one-day access into the garage area.

QuintEvents picked up rights to F1 in 2017, and Bruce said it was too early to say whether Miami would be its most lucrative event yet, in part because of the lower attendance. But he said Miami will easily end up in the top three most lucrative events this season alongside Monaco and the U.S. Grand Prix at Circuit of the Americas.

Bruce said he’s particularly focused on working with SFM to provide timely and smooth shuttle services for fans, given the large amount of remote parking for the event. Many of the usual parking lots at the stadium are being used as part of the F1 race footprint.

Concessionaire Sodexo Live is also treating the race similarly to a Super Bowl. The company expects per-cap spending to approach Super Bowl levels — the most recent Super Bowl hit $167 — and Sodexo Live is bringing in 75 managers from its markets across the country to assist the effort in Miami. Sodexo Live serviced Super Bowl LIV at Hard Rock Stadium in early 2020 and has handled Final Fours and the U.S. Open golf championship in recent years, but the scale of the F1 race is larger than almost anything the company has done.

“It’s a different kind of event,” said Zachary Williams, Sodexo Live general manager of F1, and director of food and beverage for Hard Rock Stadium. “They’ve got a very high level of expectation, which, so do we, so I think we all know how to handle that.”

Sodexo Live has broken the property along the circuit into eight zones, each of which is almost like its own arena, with everything from general admission seating to high-end premium.

The basis of Sodexo Live’s operation is three main kitchens — two permanent spots inside Hard Rock Stadium and the main kitchen, a temporary structure in Turn 5 that will serve as the event’s main receiving and dispersal area. “Luckily we have the building that has some permanent facilities in it, which is a huge help for an event like this,” Williams said.

The race will feature more than 300 food and beverage locations, a mix of clubs, concessions, restaurants and beverage-focused offerings, a number that’s roughly three times what Sodexo Live would service for a normal Dolphins game at the stadium. Sodexo is also providing F&B for the F1 teams’ suites, with a stand-alone menu for each.

Sodexo Live’s offerings reflect an event held in Miami with a crowd that will heavily feature South Americans and Europeans. The concessionaire is working with master sommelier Carlton McCoy to curate a wine list, and certain premium locations will feature bottle service and delivery to tables or seats. Fourteen minority-owned restaurants will be involved with the race’s F&B program, as will several Michelin star chefs. F&B package prices range from $400 to $3,150 for a group of 10. The menu features items such as smoked marlin dip, wagyu tenderloin, and rock shrimp ceviche.

The primary challenge is logistics, especially with 98% of the structures temporary. Williams and his team built out their operation at the same time the structures were going up, so simple things like accessing power sources could be trickier than normal.

“There are a lot of moving parts. All the things that go into creating what’s going to be this small city on event weekend,” said Williams.

Making the premium areas of that small city feel substantial and luxurious, and not just like a tent city, is another challenge. But the organizers have some experience with that through the Miami Open tennis tournament, another sport that features high-end, international guests in a temporary setup.

“All the fixtures and furniture and everything they put into it, they don’t miss a detail,” said Williams. “We’ve got a really good look to it, and we add that feel to it at the end with the food and beverage.”

The Takeaway: Russia-Ukraine war spills over into Nile Dam dispute