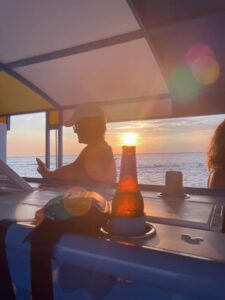 All aboard, and onward toward a magnificent sunset! On a beautiful summer evening, about 15 passengers lined up at Morrison Marina’s slip 18 in Beach Haven for a public sunset cruise to Mordecai Island and along the Intracoastal Waterway in Barnegat Bay.

Capt. Rob Romanowski welcomed passengers aboard the 35-foot pontoon boat called the Queen City Cycle Boat. A handful of women took their seats at the lounge, situated in the bow of the boat, for a wide open view of the surrounding seascape. The remaining passengers took to the bar. First Mate Tyler Spicer gave the appropriate safety briefing before the boat set off into the evening.

“In terms of cycle boats, I have the only one on the Jersey Shore,” said Romanowski, who launched the Queen City Cycle Boat in July. He discovered cycle boats online a few years ago, and began dreaming up the possibility of turning the concept into a business venture. 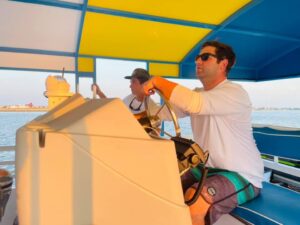 ALL ABOARD!: First Mate Tyler Spicer joins Capt. Rob Romanowski at the wheel of the Queen City Cycle Boat.

“I just thought Beach Haven, in particular, was missing something,” he said. “If you’re here for a week or a weekend … there’s just not a lot of options for getting out on the water.” Unless someone either owns a boat on LBI or is willing to rent one, the only other option to get on a boat on the south end of the Island had been a huge charter boat. Romanowski explained the cycle boat fulfills that middle range for people who are just visiting and want to have a commitment free, low-key outing.

Each seat at the bar has its own personal cooler, already stocked with ice, and a pedal station. The pedal stations are all 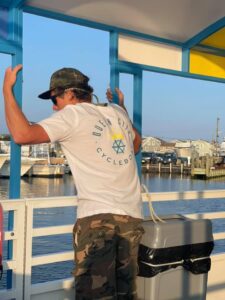 attached to a central paddle beneath the boat. An ambitious enough party could propel the boat all on the energy of a wild night out.

This particular cruise was relaxed, floating along glassy, serene water, so Romanowski kept things motoring along as passengers enjoyed their drinks and throwback jams pumping out of the sound system. One person in the party was dubbed DJ, and he took his title seriously, keeping the vibe upbeat with ’80s and ’90s hip hop.

Meanwhile, a group of sisters from various parts of NYC enjoyed the view of the setting sun and the subsequent moonrise from their lounge seating.

“We did something like this eight years ago out by the lighthouse,” said Diane Stewart of Staten Island. “This sounded like fun, with the pedaling.” Her sister, Beth Thomas, added, “And it’s such a beautiful night!” Around them, the sun was dipping low, casting an orange glow between pastel streams of clouds onto the surface of the water. 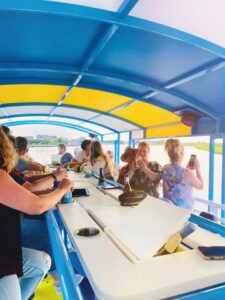 Once the last light faded, the glow of party lighting transformed the boat into a floating dance club. There is even a restroom on board for when nature calls – while in the middle of nature.

In addition to 90-minute and two-hour public mixer cruises, which can be reserved for just under $50, the Queen City Cycle Boat is available for private charters (for up to 24 passengers) to spice up any event. 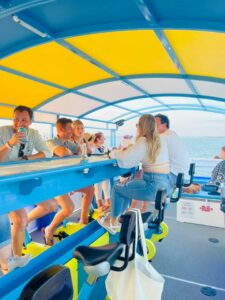 Patrons pedal along while enjoying beverages to a stellar sunset.

Possibilities for a party on the water are endless. The vessel is a traveling template that can be dressed up or down according to the tastes of its passengers. Passengers bring their own food and beverages. Romanowski provides coolers, koozies, ice, cups and bottled water.

“We’ve seen everything from pizzas to full-on charcuterie boards,” he said.

He referenced One Board Blonde Charcuterie (@One Board Blonde, on Facebook) as someone who creates some of the beautiful “grazing tables” he’s seen aboard the boat.

Public and private trips are available until at least October, weather dependent. Visit queencitycycleboat.com to register.