US futures for the , , and , along with European stocks, all struggled to rally on Monday amid significant caused by the Omicron variant during the holiday weekend.

Treasury yields fell and the US dollar rose.

At time of writing, contracts on the S&P 500 and NASDAQ 100 were trading in the green, while were flat even as were lower. This paradigm—a reversal of the cyclical rotation—is the roadmap for investing according to a world subject to social restrictions.

Value stocks, most associated with the opposite ends of the market cap spectrum—since the Dow lists mega-cap blue-chip shares and the Russell 2000 is home to small-cap domestic firms—are struggling today. Conversely, growth shares, as represented by stocks on the tech-heavy and the , which is currently overweight technology firms, are gaining.

In Europe, a slump in the energy sector—tracking lower oil prices—offset an advance in real estate stocks, forcing the to give up a rally.

Developments out of China were a case of good news/bad news for investors. On the one hand, over the weekend, China saw its worst daily jump in COVID cases in 21 months, with infections more than doubling in the northwestern city of Xian. On the other hand, the Sino central bank, the PBoC, promised to the country’s economy. The remained flat, reflecting investor ambivalence.

Markets in Australia, Hong Kong, the UK, and Canada are closed today for an extended Christmas holiday.

Yields on the Treasury fell for a second day, as investors increased their safe-haven positions. 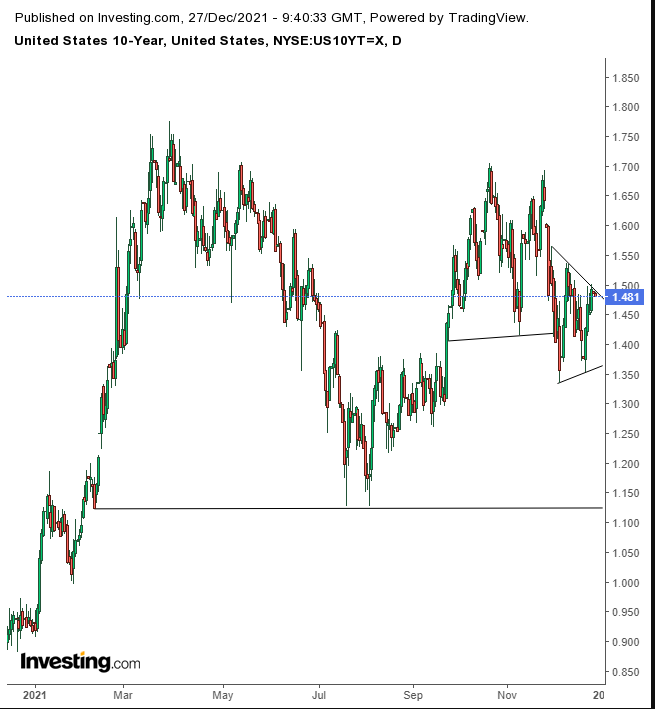 Rates retreated from the top of a symmetrical triangle, whose downside breakout would be in the service of the preceding double top. In turn, the successful completion of the double top’s implied target would retest the neckline of a massive double top since February.

The rose for the first time in five sessions. 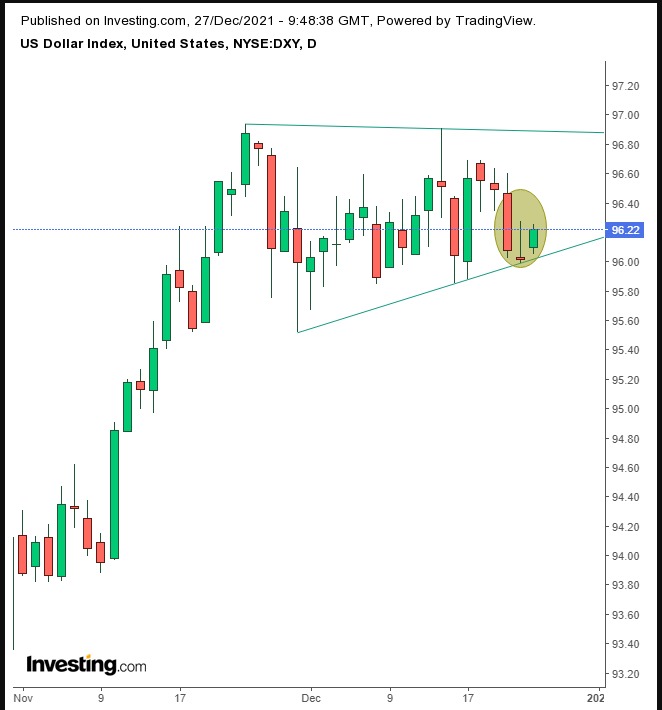 The greenback found support at the bottom of an ascending triangle, a pattern indicating that buyers raised their bids while sellers were willing to take a risk only at the highest prices.

Friday’s trading produced an inverted hammer with today’s gains confirming its bullishness. If the price closes today above Friday’s intraday high, it will also complete an Evening Star. However, given the short decline that preceded it, there is no significant interest in this move. We expect the triangle’s upside breakout to trigger another leg higher, testing the 98 levels.

has retreated on dollar strength after reaching its highest level since Nov. 19 on Friday. 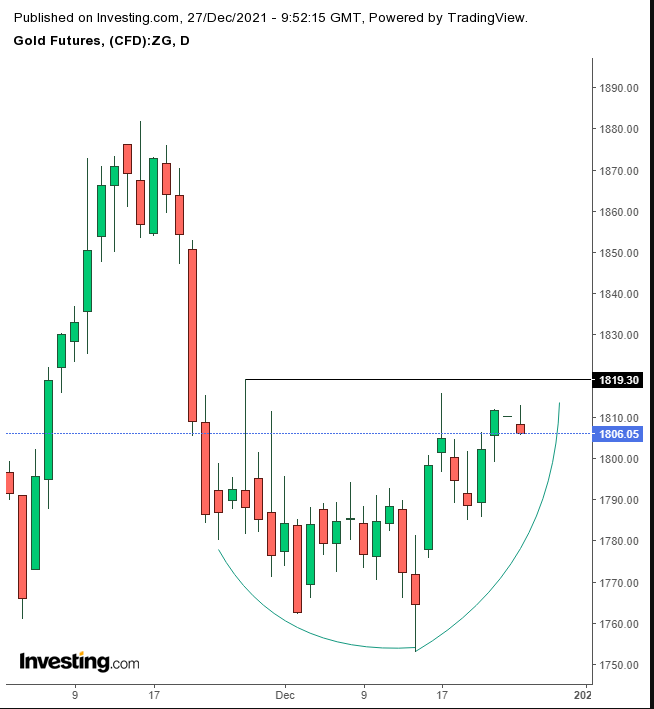 Bulls of the precious metal may struggle to complete a rounding bottom, a pattern whose culmination is difficult to determine due to its rolling form. However, if the price of the yellow metal closes above $1,820, the highest within the design, we’ll call it a bottom.

was flat for a fourth day. 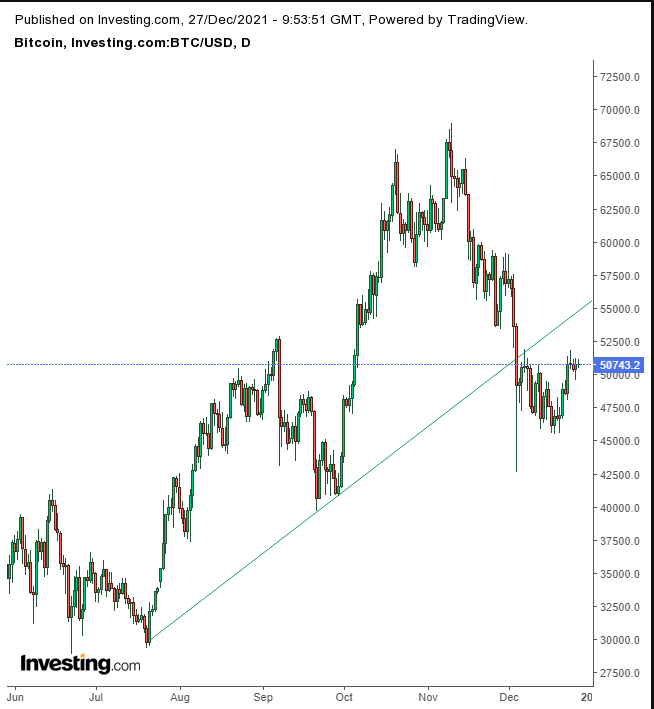 The largest cryptocurrency by market cap struggled to maintain a rally after failing to remain above its uptrend line. The cryptocurrency’s , signaling the crypto isn’t about to head higher.

slumped this morning, as overcame risk appetite. Market anxiety continues to escalate that Omicron-fueled airline cancellations, which wiped out thousands of scheduled flights during the Christmas weekend, will hit energy demand. Adding to the worries, some cruise lines canceled stops after onboard virus outbreaks. 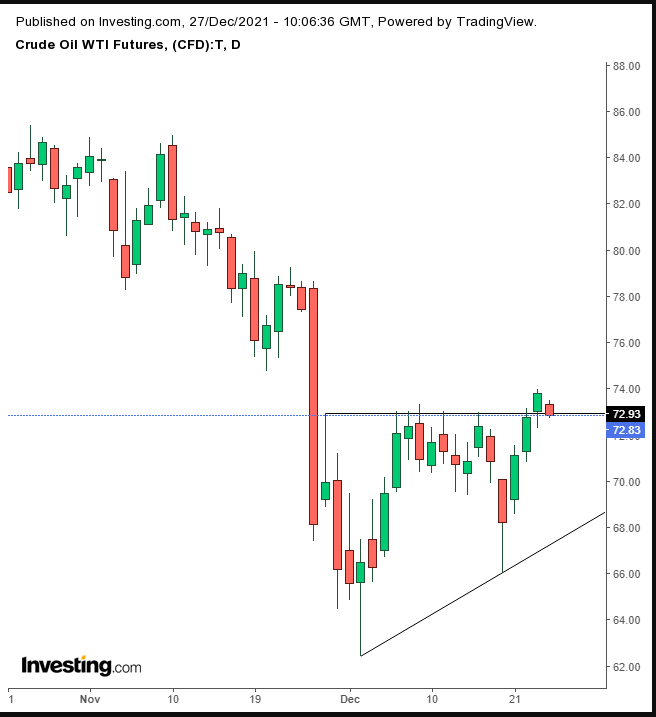 WTI retreated this morning, yet still remained above a bullish ascending triangle. If the price holds above $73, we expect the energy commodity to rise to $83 on momentum.