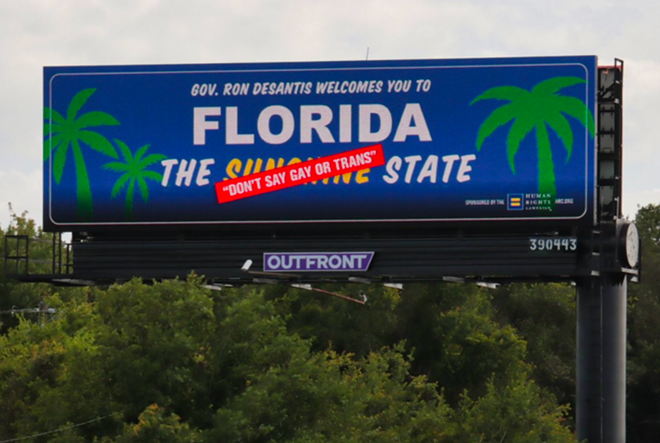 Instead of welcoming visitors to the “Sunshine State,” a new billboard campaign from the Human Rights Campaign, one of the nations leading LGBTQ rights groups, is instead labeling  the nation’s southern appendage as the “Don’t Say Gay or Trans” state.

The billboards, which are located in Orlando, Tampa and Tallahassee for the next four weeks, read “Gov. Ron DeSantis welcomes you to Florida the “Don’t Say Gay or Trans” state, with the word “Sunshine” crossed out. The group also has plans for billboards in the Miami area.

The billboards are in response to DeSantis’ recent signing of the controversial “Parental Rights in Education” bill (HB1557), which critics have called the “Don’t Say Gay” bill.

“Florida’s ‘Don’t Say Gay or Trans’ law is outrageous and discriminatory. It needs to be repealed immediately. This billboard campaign is designed to make people confront what this terrible law really does: censor and silence educators and isolate LGBTQ+ students and their families,” said Joni Madison, Interim President of the Human Rights Campaign.

While the phrase “Don’t Say Gay” isn’t explicitly in the bill, it does ban public school teachers from holding classroom discussions about sexual orientation or gender identity. The bill reads, in part: “Classroom instruction by school personnel or third parties on sexual orientation or gender identity may not occur in kindergarten through grade 3 or in a manner that is not age-appropriate or developmentally appropriate for students in accordance with state standards.”

A version of this story appeared at Creative Loafing Tampa Bay.