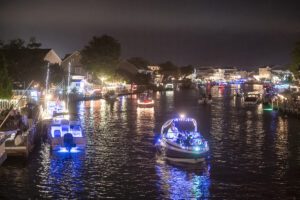 A block party on the water – that was the original idea that grew into the Lagoon of Lights in Beach Haven West, held each summer on the last Saturday in August.

Not just a parade, the event begins shortly before sunset with boats milling around and neighbors shouting hellos and eventually turns into bumper-to-bumper boats going both directions – all of them illuminated and decorated in grand fashion, with houses along the routes similarly festooned.

Event co-founder Paul Lally rarely posts to Facebook, but in the Beach Haven West Community Group he shared the origin story, which is “not that exciting and does not have any deep meaning,” he said.

“It was just a couple of guys sitting on a deck, talking, and getting smarter with each drink. No politics, no deep meaning, just summer fun.”

About 16 years ago, Lally and his neighbor Mike Aiello were talking about notable events in other beach towns: Wildwood’s Christmas in July, Ocean City’s Night in Venice and Avalon’s Flotilla.

“After a few more drinks, we said, ‘Since all of us have summer parties at different times, how about we have our parties on 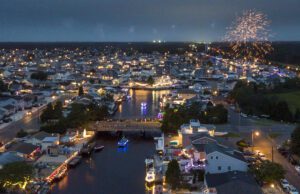 the same day and we light up our houses?’” That led to the name Lagoon of Lights.

Aiello talked to the neighbors and created banners to hang along the lagoon. He also puts fliers in mailboxes.

The first year, five houses on Jennifer Lane participated. A few boats came down the lagoon to check it out, which was a precursor to the boat parade aspect of it. Now it’s all the lagoons that run along Beach Haven West Boulevard, between Jennifer Lane and Morris Boulevard, and between Morris and Paul boulevards. Each year it gets bigger, expanding throughout the lagoon community. The boats and homes along the route are illuminated and decorated to the hilt. Party people glow and cheer at everyone on the water. 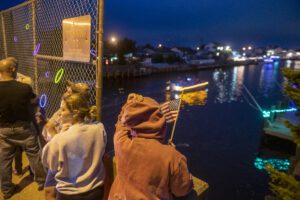 “The Lagoon of Lights is lighthearted fun,” according to Mary Palmer, who had a front-row seat to the action, visiting a friend. “For a couple of hours, I didn’t think about COVID, Afghanistan, hurricanes or any of the other problems in the world. We have wonderful longtime friends who live on one of the lagoons, and every year we and other friends gather in their yard to eat, drink, talk, laugh a lot – and, of course, watch the decorated boats go by. The inventiveness of the boat owners always amazes, and we all cheer and wave to them. This year there were only a few friends because of COVID, and we were all fully vaccinated. One boat always includes an Irish bagpiper, and that’s very popular. As I was trying to get a photo of Santa on his boat, he sent a candy cane with a light on it whizzing by my head; I didn’t realize what it was and ducked! I really liked the boat they’d turned into a convertible car, blasting out songs from the 1950s.”

Lori DeSantis helped to organize and promote the event this year. Her lagoon got involved in 2018. “Over the past few years, it’s grown from one lagoon to three additional lagoons, where boats cruise up and down,” she explained.

Cruisin’ Tikis LBI had two boats in the event and gave away a free tiki cruise for six, catered by Cluck ’n Crabs 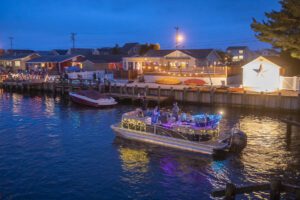 (congratulations, Ashley Britton!). Chuck Miller played live music on one of the boats, and Ted Hammock played on the other. This year marked Cruisin’ Tikis LBI’s second time being involved, according to co-owner and Capt. Mike Bishop. He and his fiancée, co-owner and co-Capt. Paige Meelheim, started the business last spring.

“We are so thrilled to be embraced by locals and become a staple in the community, both LBI and Beach Haven West,” Bishop said.

The iffy weather forecast probably kept some folks off the water, he said, “but there was still a very good showing of boats and amazing decorations and backyard parties – lots of themed parties with bands and DJs.

“The atmosphere was outstanding,” he continued. “People were hooting and hollering from their docks, waving at the tiki boats, which was great. Everyone seems to go wild when we go by and ring the bell.” 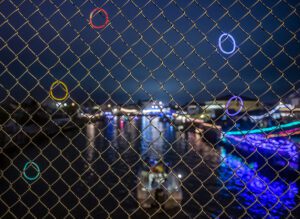 The most memorable sight of the night, he said, was a massive pirate-themed party at the corner of Walter Boulevard. “They even had all their windows decorated with cannons, so the entire house looked like a giant pirate ship.

“There were some other really cool ’70s-themed parties, and one of my favorite boats that we passed was a Star Wars-themed boat, where they were acting out a light saber fight between Darth Vader and Luke Skywalker – it was freaking awesome!”

But his favorite part of the whole night, Bishop said, was when they pulled up to Mill Creek Park and Ted and Chuck played a few songs, which brought all sorts of kids and music fans down to sing. “And we even had a few cars pull over to watch. Ted Hammock said to me, ‘I’ve played thousands of gigs, and I’ve never played on a floating tiki hut, so this awesome.’ Being a local and watching these guys play at various venues in our area, it was an honor to have them on the boats, providing some live entertainment as we cruised the lagoons.”

According to DeSantis, Noel and Laura O’Keeffe’s bagpipe boat is always a popular attraction. Noel is a bagpiper – a member of the South Park & District Pipes & Drums band, which has been playing together for 30 years.

“We have been doing the Lagoon of Lights for at least 10 years,” Noel explained. “We have a family pig roast every year. It varies year to year, but last night we had four pipers, four snare drummers and one bass drummer. Our boat’s name is The High Road.” 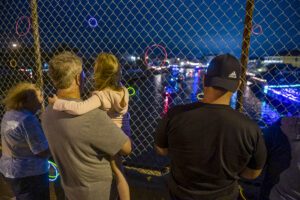 With year-round residents and second homeowners raising their glasses in a unified toast to summer, the event fosters a sense of community and togetherness as the season winds down.

“This thing has a life of its own and just an amazing vibe around town,” Noel said. “We are on the Beach Haven West lagoon (the original), and also had a party at the house, so we don’t get over to Paul and Mill Creek lagoons, but from the photos on Facebook it was successful.”

Palmer’s friends who live in Beach Haven West are Carol and Jack Warr. Jack’s birthday always falls on or near the Lagoon of Lights, so they always celebrate it that evening.

“I think there were a lot more people this year,” Carol said. “I can’t believe how it’s grown over the years. We love seeing everyone on the (Marsha Drive) bridge, and this year an enterprising ice cream truck came. Very smart. This is our big party of the year; hopefully we can get back to inviting everyone again next year. Oh – and our favorite is always the bagpipes.” 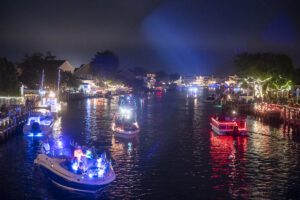 “I would love to see the three lagoons pick separate dates in the future, so we could have three great nights during the summer, out on the boats all decorated,” he said. “I’m sure I could get pipers and drummers to come play all of them!”

“This is a true grassroots event that grows each year just by posts on Facebook, and everyone looks forward to it each year,” DeSantis said.

“This is a really fun family event, and we are very happy to be part of it,” Bishop said. “It’s definitely on our calendar every year.”

“It is amazing to watch what is has become,” Lally said. He urges everyone to “keep it going, and please keep it fun.”