From ultra-fast grocery delivery promises to the rapidly growing IPO ambition among startups — things are moving at a fast pace in the Indian tech industry.

Speed is the name of the game among Indian startups these days. From ultra-fast grocery delivery promises to the rapidly growing IPO ambition among startups — things are moving at a fast pace in the Indian tech industry.

But on the other hand, startup funding slowed down slightly in comparison to previous weeks, which was followed by CarTrade’s less-than-impressive stock market debut. But before we go into the details, here’s a look at the top Indian tech stories this week:

India’s ecommerce sector is one of the most mature tech sectors in the country, but that could very well see a big setback in the light of recent regulations being proposed by the government.

The upcoming ecommerce policy will target the indirect stake held by ecommerce giants Amazon India and Walmart-owned Flipkart in some of the largest sellers on their marketplace platforms. This has already resulted in Amazon exiting the JV it set up with Narayana Murthy’s Catamaran Ventures for one of its largest sellers Cloudtail.

There could be further disruption in this sector, if the government’s statements on the matter are any indication. Targeting the Tata Group, commerce and industry minister Piyush Goyal expressed deep anguish that going against national interests, the group had opposed rules that he claimed would help consumers.

Perhaps it is this uncertainty that has drawn Adani Group to the super app race. The conglomerate’s new division Adani Digital Labs will lead the super app charge, which is said to be in development since January. Will Adani be able to one-up Tata Group and Reliance in the super app race?

Speaking of Reliance, the company’s acquisition deal for Future Group’s retail and warehousing businesses still hangs in the balance. The Supreme Court of India upheld the Singapore International Arbitration Centre’s emergency award to US ecommerce giant Amazon blocking the $3.4 Bn acquisition deal. The final word on this case is yet to come and it could very well determine the future of the retail and ecommerce industry.

Within ecommerce, one cannot ignore the rise of direct-to-consumer startups and brands. In 2021 alone, India’s D2C startups have raised more than $783.7 Mn, as per Inc42 Plus analysis. And this has led to new categories such as D2C cigarette brand Hash, which is looking to disrupt the incumbents in this space. Another emerging category is pet care, where D2C startup Heads Up For Tails raised $37 Mn (INR 277 Cr) from Verlinvest, Sequoia and others to expand its distribution and retail footprint.

With $743 Mn raised across 41 funding deals, this is the first week since the beginning of July where the startup funding amount has not crossed the $1 Bn mark. 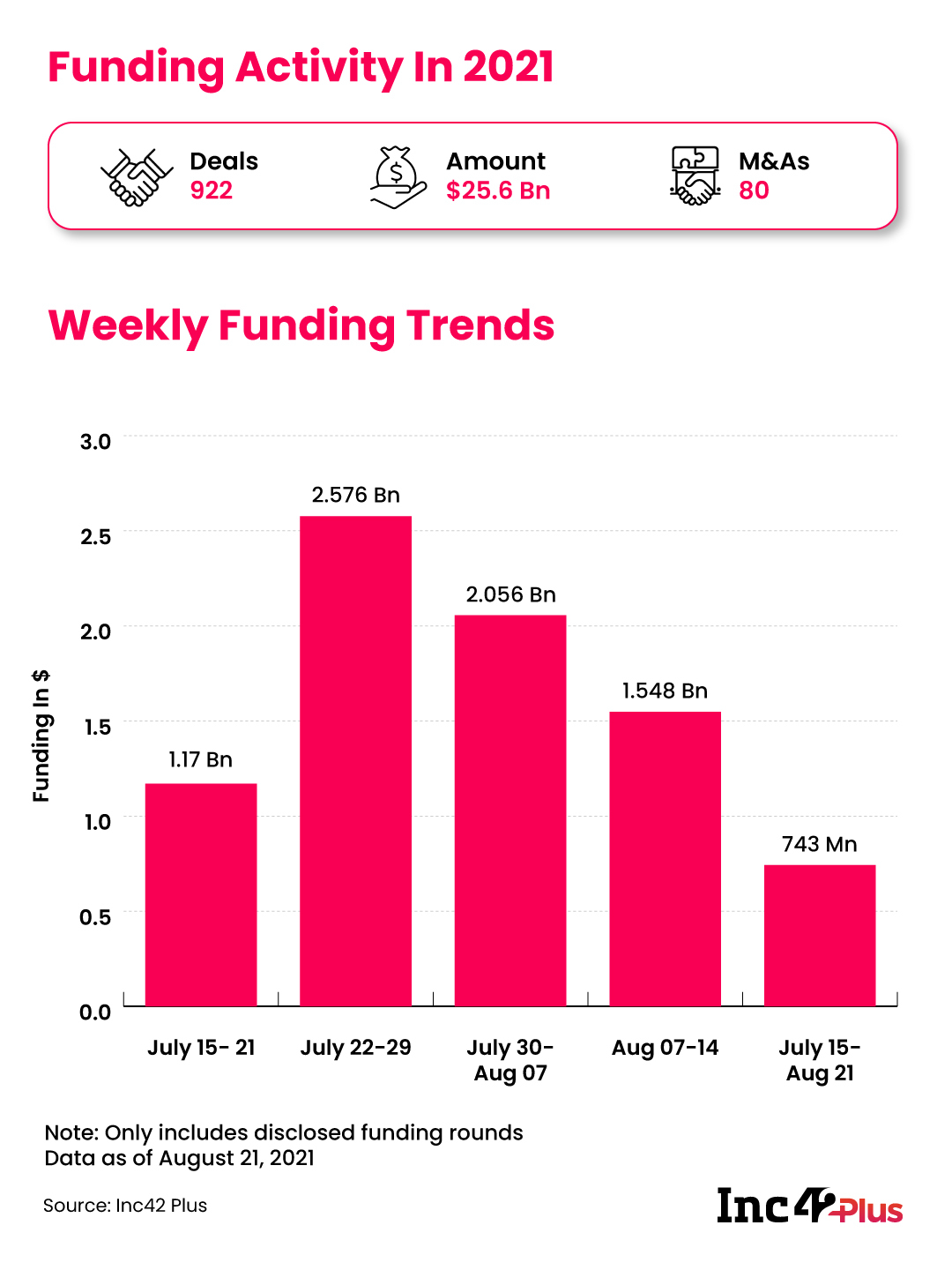 This week, CarTrade made a lukewarm debut on the stock market, in line with analyst expectations. The automobile marketplace was trading at lower than its listing price on Friday, August 20, closing with a discount of nearly 8% against its issue price of INR 1,618. It tumbled 8.77% to INR 1,476 during the day and then ended at INR 1,500.10. The company’s market cap was at INR 6,875.57 Cr on BSE.

Of course, there were some apprehensions about CarTrade’s high listing price in the days ahead of the IPO, but it remains to be seen whether the company bounces back in the next week to provide some relief to investors.

Entering the IPO trail, travel and hospitality software-as-a-service (SaaS) startup RateGain has filed its draft red herring prospectus, ahead of a potential initial public offering (IPO). The IPO comprises a fresh issue of equity shares aggregating up to INR 400 Cr and an offer for sale of up to 2,26,05,530 equity shares. 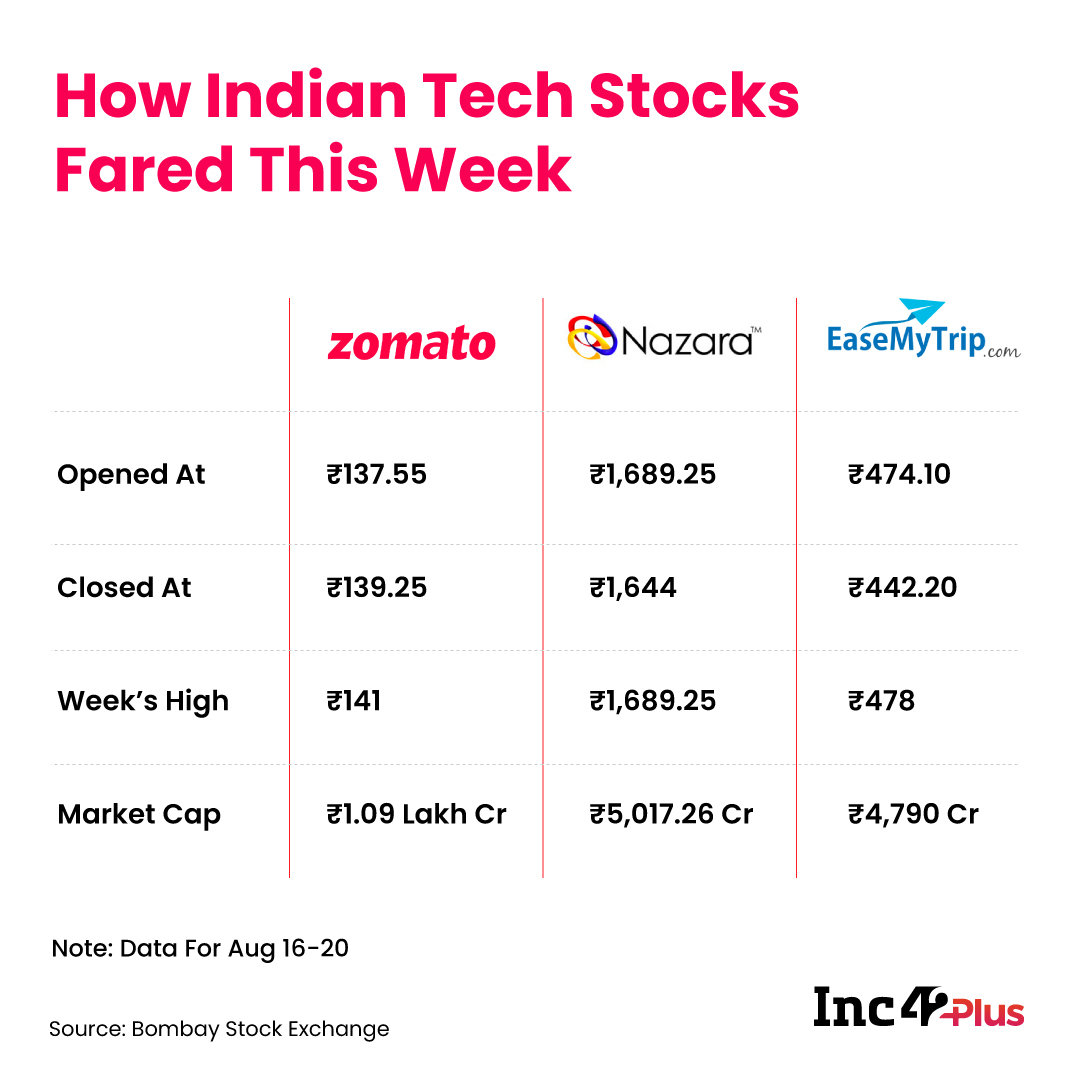 As more and more startups join the IPO parade, the focus will also fall on some of the key leaders within these startups. We have been tracking the organisational structure and board constitution of startups that are going for IPOs in the near future.

Our Org Charts series has already covered companies such as online travel aggregator ixigo, fintech startup Policybazaar, Zomato, Paytm and others, highlighting not just the key personnel, but also the decision makers across the various verticals and the compensation structure for these leaders.

Here are the key stories we are tracking this week:

That’s all for this week.