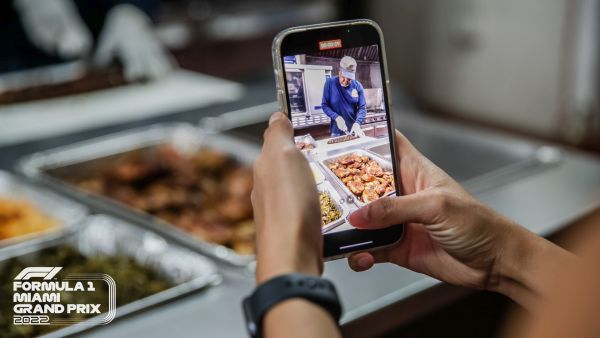 •    Popular local establishments Seaspice, Michael’s Genuine, Harry’s Pizza, Groot Hospitality, Casa Tua, and ZZ’s Club are among the many that will offer menus with produce sourced from the South Florida region

MIAMI GARDENS, Fla., South Florida Motorsports (SFM) is bringing the very best food and beverage offerings to the Formula 1® Crypto.com Miami Grand Prix this coming May 6-8, 2022. The South Florida region is famous for its bar and restaurant culture and over the course of the race weekend, attendees to the track will get the opportunity to sample some of the best culinary delights the city has to offer.

With over a dozen local Participating Restaurants offering a range of amazing flavours, the promoters of the Formula 1® Crypto.com Miami Grand Prix are delighted to be able to bring the cuisine of South Florida to the guests of the race to enjoy. Attendees will have the opportunity to experience Michelin-starred offerings as well as the flavors of Miami Gardens through the food and drink offerings of local minority-owned businesses.

Over the course of the race weekend, over 34 different participating restaurants will be responsible for the menus throughout the Miami Campus and the Miami International Autodrome. From the fan areas to the premium hospitality locations, such as the suites and MSC Cruises Yacht Club, the menus will feature a distinct Miami feel, combining the culinary expertise and produce of the area.

An expansive range of iconic local restaurant concepts emblematic of South Florida will be featured across the Miami Campus. They include eateries such as… 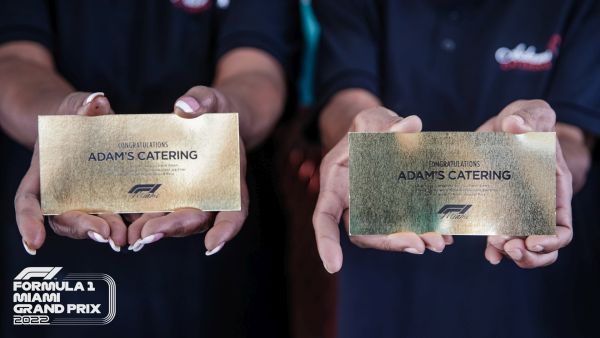 Seaspice has brought a vision unlike any other to the Miami River where locals and tourists flock to get a taste of the signature wood-fired casseroles and specialty-crafted cocktails, all while taking in the breathtaking scenery of the Miami River and downtown skyline.

This is place to sample Miami’s own James Beard Award Winning Chef Michael Schwartz’s Burgers and Fried Chicken Sandwiches. ‘Food & Wine’ said this burger was one of the best in the country — you must try with house smoked bacon or a Black Truffle Crema.

Groot Hospitality is a Miami-based collective of top restaurants, nightclubs and hotels. Officially formed in 2018 by entrepreneur, David Grutman, the company is a forerunner in its field, creating unique atmospheres of upscale dining, luxe decor, marquee entertainment and highly shareable moments.

Groot Hospitality will create a bespoke experience for the 72 Club in the Miami International Autodrome Campus, and will serve a selection of signature items from its restaurants Komodo, Swan, Papi Steak, SFC, Strawberry Moon and The Key Club, such as Chips & Caviar, Peking Duck, A5 Rolls, Wagyu Pastrami and more.

Created to evoke the feeling of ‘your home’ as the name suggests, Casa Tua at Miami International Autodrome is a soulful, boutique hospitality space offering invited guests access to a trackside private members club.

Located inside Paddock East, the pinnacle of Formula 1 hospitality, Casa Tua will create an atmosphere that combines fine Italian fare with welcoming service and a trackside view of the action, making it one of the most desirable areas of the circuit.

ZZ’s Club is a restaurant and private membership club from Major Food Group located in the heart of the Miami Design District, designed for individuals who appreciate the highest caliber of dining and service, unlike anywhere else in Miami.  The Palm Club X ZZ’s Club will showcase a variety of exceptional Japanese dishes and cocktails in a luxurious setting to dine and watch the race.

James Beard Award-winning Chef Michelle Bernstein, a Miami native of Jewish and Latin descent, has dazzled diners and critics alike with her sublime cuisine and personality as bright and vibrant as the Florida sun.

Attendees will be treated to several of Bernstein’s acclaimed South Florida concepts throughout the campus, including an exclusive preview of Sra. Martinez, Bernstein’s forthcoming dining and entertainment experience set to open later this year in downtown Coral Gables.

Sra. Martinez will offer an eclectic menu of Old-World Spanish and America favorites with innovative, contemporary twists, all infused with Bernstein’s eye for great product and her signature knack for vibrant, deceptively simple, yet layered flavors.

In addition, her eponymous catering company, Michelle Bernstein Catering, will serve her award-winning cuisine for the Yacht Club area; while Sweet Liberty, ranked one of the world’s top 100 bars, will provide vibrant cocktails and innovative mixology, as well as their famous Cauliflower Nachos.

COTE, the Michelin-starred and James Beard Award-nominated KOREAN STEAKHOUSE™ and vision of proprietor Simon Kim was unveiled in Miami’s Design District this Winter. Emulating its flagship, the high-energy New York City-based locale is synonymous with marrying the fun and fire of Korean barbeque with the hallmarks of a classic, regal American steakhouse. The result is a unique and convivial atmosphere infusing a fine dining experience with world-class ingredients and service complemented with a show-stopping beverage program.

Other restaurant examples include the Peruvian Sushi bar SuViche, popular bistro Novecento, the colorful CHICA and Capri. In addition to the indulgent dishes at Yardbird (known for its heady bourbon cocktails), Menchie’s, the famous fried chicken eatery Fuku by David Chang, Japanese delights of OMAKAI Sushi, Sushi Maki, Pubbelly Sushi and Kosushi and the legendary Havana 1957 which allows you to relive the glory and glamour of Cuba in the 1950s.

“From general concourse areas to the premium hospitality spaces, we have been preparing the dining experience for Formula 1® fans for more than a year,” said Richard Cregan, CEO of the Formula 1® Crypto.com Miami Grand Prix.
“I know fans from across the world will love these unique offerings celebrating our diverse food culture, especially those from local and minority-owned restaurateurs. The culinary team will help deliver a local-authentic winning approach to food, beverage and hospitality at what will be a spectacular global event.”

Over the course of the race weekend, Chef Dayanny De La Cruz, Sodexo Live! Executive Chef of the Hard Rock Stadium will be responsible for the menus across the fan areas and premium hospitality locations such as the suites and MSC Cruises Yacht Club, where the menus will feature a distinct Miami feel, combining the culinary expertise and the produce of the area.

The Miami Campus will also boast unique experiential beverage activations with Herradura, Hendricks, Glenfiddich, Cincoro, Whistle Pig, Organika and Flor de Cana to name a few. Herradura will create the signature MIA cocktail for this year which will be a refreshing MIA Skinny Margarita while Hendricks will create a unique 3-story bar located in the East Campus that is open for all guests to experience.

Glenfiddich also have a branded bar located in the MSC Cruises Yacht Club where they are customizing the fan experience to provide an unforgettable race weekend and VIP experience for all race attendees and Formula 1 Global Partner, Ferrari Trento will also activate a custom Sparkling Wine bar in the North Campus International Piazza. 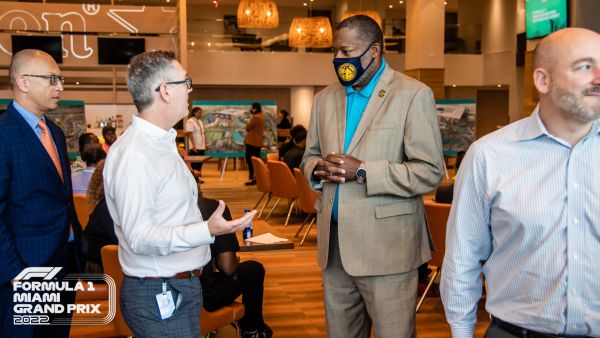 In addition, 14 local minority-owned restaurants will have a presence at this year’s inaugural event in and around the Campus for the duration of the race weekend:

Drinks on Me 305: Food truck offering American cuisine in the local Miami area 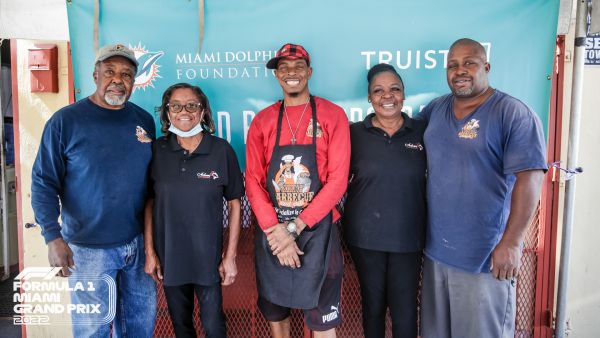 The other highlight of the dining experience for the Formula 1® Crypto.com Miami Grand Prix include a best-in-class wine program, created in close collaboration with Carlton McCoy, a graduate of the Culinary Institute of America. Named a Master Sommelier in 2013 at just 28 years old, McCoy was one of the youngest people and the second African American to earn this prestigious title.

At the conclusion of the event, Hard Rock Stadium and Chef Dayanny De La Cruz, Sodexo Live! Chef of the Hard Rock Stadium will work to donate prepared but unused food items to the Miami chapter of Food Rescue US, to directly benefit local missions and shelters around South Florida. The group regularly rescues food from Hard Rock Stadium and has kept three million pounds of food out of landfills since its inception in 2018.


Alfa Romeo F1 Team ORLEN have announced a new partnership with leading network intelligence company, Path Network. The multi-year deal will see Path help protect the team’s network infrastructure, both on and off the track, ensuring Alfa Romeo F1 Team ORLEN retains the competitive edge needed to win in the competitive world of Formula One. more >>


Pirelli F1 Imola GP qualifying – The road to the pole


Alfa Romeo F1 Team ORLEN will enter the exclusive group of world-class sports teams and clubs to issue its own personalised payment car as it joins with REPX, the London-based fintech company. The launch of the team card, schedul more >>


On Earth Day, Williams Racing is pleased to announce a multi-year agreement with Coral Eyewear as an Official Licensee, which will see Nicholas Latifi and Alex Albon wearing Coral’s distinctive polarised-mirror sunglasses this season and the release of Williams Racing sunglasses. more >>