Bitcoin (BTC) starts a new week with much to make up for after its worst April performance ever.

The monthly close placed BTC/USD firmly within its established 2022 trading range, and fears are already that $30,000 or even lower is next.

That said, sentiment has improved as May begins, and while crypto broadly remains tied to macro factors, on-chain data is pleasing rather than panicking analysts.

With a decision on United States economic policy due on May 4, however, the coming days may be a matter of knee-jerk reactions as markets attempt to align themselves with central bank policy.

Cointelegraph takes a look at the these and other factors set to shape Bitcoin price activity this week.

Fed back in the spotlight

Macro markets are — as is now the standard — on edge this week as another U.S. Federal Reserve meeting looms.

As inflation runs rampant worldwide, it is expected that Chair Jerome Powell will make good on his previous pledges and announce key interest rate hikes.

How severe and how quickly they are applied is a matter for debate, and a separate debate concerns whether markets have already “priced in” various options.

Any shocks are likely to spark at least temporary volatility across markets, and over the past six months or so, crypto has been no exception.

Attention is thus on the Federal Open Markets Committee (FOMC) meeting to be held on May 3 and May 4.

“First came the Fed. Then the Netflixpocalypse. Then the Russian invasion. Then the sanctions. Then the Fed and the largest treasury dump ever. This week it was earnings. Next week the Fed again,” macro analyst Alex Krueger summarized over the weekend:

The Fed’s QT announcement on Wed will determine the fate of the market.

Krueger was referring to a policy known as quantitative tightening (QT) — the counterpart to quantitative easing, or QE, which describes the Fed’s pace of economic support withdrawal in a bid to reduce its $9 trillion balance sheet.

Risk assets, already sensitive to a conservative environment, are already tipped by Bitcoiners to lose big in the coming months, taking crypto down with them.

“It’s easy to overlook this, given the broad retreat of the market last week, but: Along with meme stocks, the Bitcoin-sensitive equity basked is already making new lows,” Jurrien Timmer, director of global macro at asset management giant Fidelity Investments, added.

An accompanying chart of the Goldman Sachs Bitcoin-sensitive equity index — 19 major cap stocks with exposure to crypto — spelled out the relative pain already being experienced. 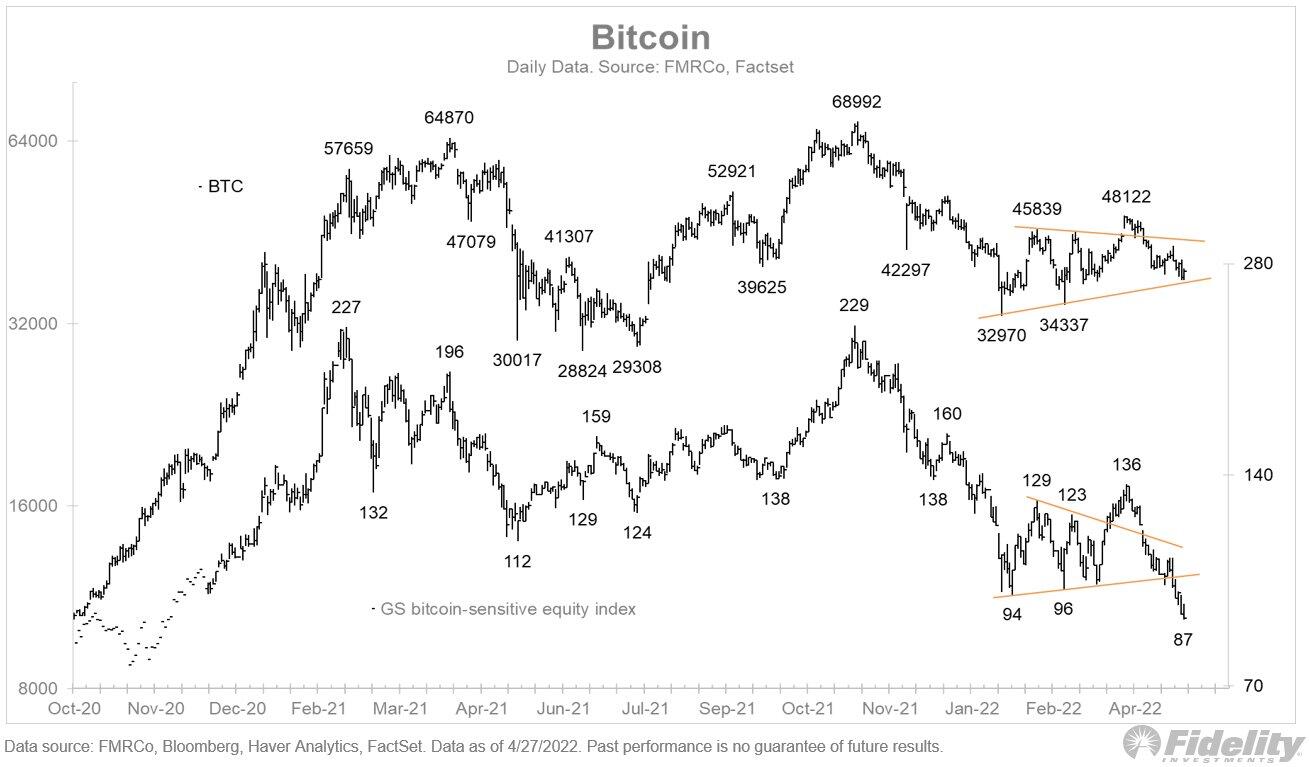 Next week will see the focus shift back toward inflation itself with the publication of U.S. consumer price index (CPI) data for April.

At around $37,600, April’s monthly close was decidedly uninspiring for Bitcoin hodlers, data from Cointelegraph Markets Pro and TradingView shows. 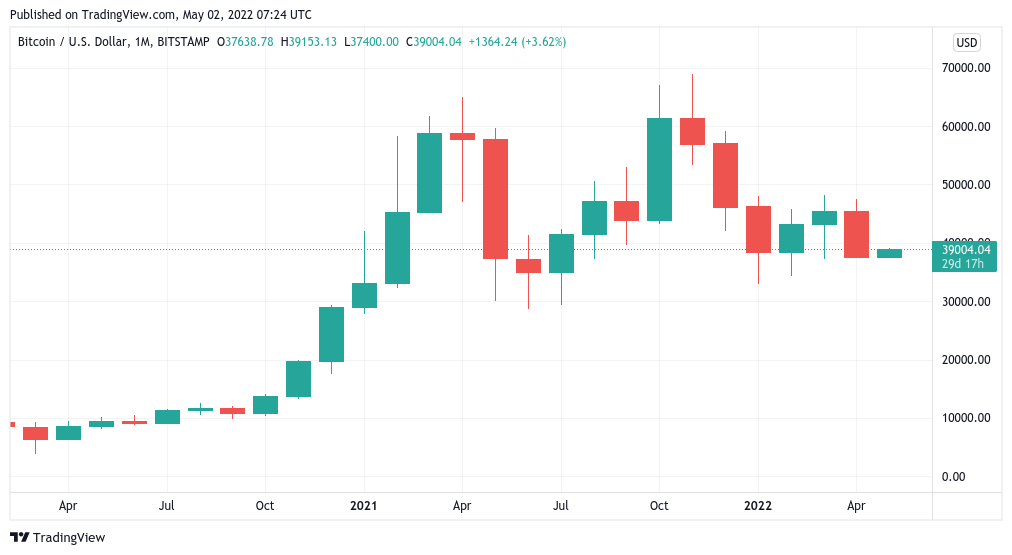 Despite subsequently regaining some ground, BTC/USD has reaffirmed at least a short-term desire to trade in a narrow range well below the top of its 2022 trading corridor of $46,000.

Expectations were previously high that April would deliver better performance, but in the end, 2022 ended up being Bitcoin’s worst April on record, with overall losses of 17.3%, data from on-chain monitoring resource Coinglass confirms.

On the back of that, it is thus little wonder that the mood among analysts is equally cautious.

“The BTC chart is heavy right now, & a break below $35k could cause a rush for the exit… But I don’t trust breakdown patterns in this range. We’ve seen short squeezes and ATH breakout traps over the past year,” popular trader Chris Dunn tweeted on May 1:

Dunn is far from alone in calling for a capitulation event to take the market to $30,000 or under.

“In regards to talk of capitulation, I believe that it would require Bitcoin to go below $30k,” analyst Matthew Hyland argued in one of several tweets about Bitcoin’s volume profile:

Low volume since May of last year which brought BTC to $30k. Low volume = low turnover of buyers and sellers. Below 30k would unlock the buyers who bought pre-65k in early 2021.

Hyland explained that low-volume markets are apt to see larger price swings, and a significant BTC price dip may be necessary to reignite engagement amid an overall lack of participation at current levels.

Over the weekend, meanwhile, calls emerged for a near-term trip to $35,000.

US dollar strength keeps up the pressure

April may have come and gone, but the ogre of the U.S. dollar index (DXY) remains firmly in the room.

A single day of consolidation on April 29 is already history, and on May 2, DXY was already attempting to continue a breakout that has seen dollar strength hit its highest since 2002.

At 103.4 as of press time, DXY shows no signs of a more significant pullback, much to the disappointment of Bitcoiners at the mercy of inverse correlation. 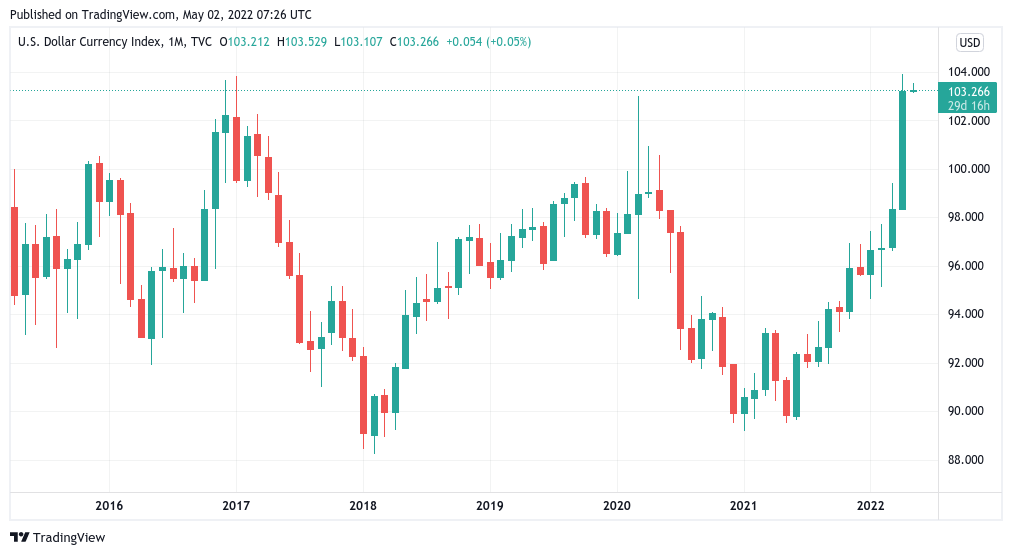 “At the moment, the inverse relationship between bitcoin and the DXY […] depicts that if the index holds above the 102 DXY resistance level, this could weaken bitcoin, and the price action could retrace to the $35k and below area, particularly if the rising DXY can be attributed to the tightening of monetary policy,” on-chain analytics firm Glassnode’s latest Uncharted newsletter explained.

In the event, 102 was little problem for DXY, which may stand to gain even more should the Fed rate hike decision be on the upper end of the spectrum.

“The development of the USD is highly dependent on the Fed’s course of action. The rising inflation and potential 50bps rate hike in early May could strengthen the DXY,” Glassnode added.

As Cointelegraph recently reported, other major world currencies have suffered along with crypto in USD terms in recent weeks, with a particular focus on the fate of the Japanese yen. Japan, unlike the U.S., continues to print vast amounts of liquidity, devaluing its currency even further.

Last week saw a new record for the proportion of the Bitcoin supply dormant for at least a year — 64%.

As seasoned hodlers — or at least those who bought before the July 2021 bottom near $28,000 — there is thus a determination not to capitulate yet.

Now, more data has been added to the mix, and it comes in the form of illiquid supply.

According to Glassnode’s Illiquid Supply Change indicator, recent weeks have produced large increases in the overall segment of the BTC supply, which is now no longer available for purchase.

The result is Illiquid Supply Change reaching levels not seen since late 2020 when BTC/USD began to exhibit signs of a “supply shock” as market participants piled into what was already a solidly “hodled” asset class.

“This number is reaching peak high numbers, which we’ve also seen in 2020 (the build-up). Ultimately, a large number of coins are ‘illiquid,’ which adds to the potential of a possible supply shock,” Cointelegraph contributor Michaël van de Poppe said as part of comments on the numbers.

Continuing, Van de Poppe argued that the indicator “tells a lot” and could even take some of the fear out of a dip to $30,000.

“Yes, the market can still make a new lower low in which the bear market continues (relatively; the altcoin bear market is currently already active for a year, which means that retail is gone) and a hit of $30K can be reached. But, fundamentally, the data tells a lot,” he added. 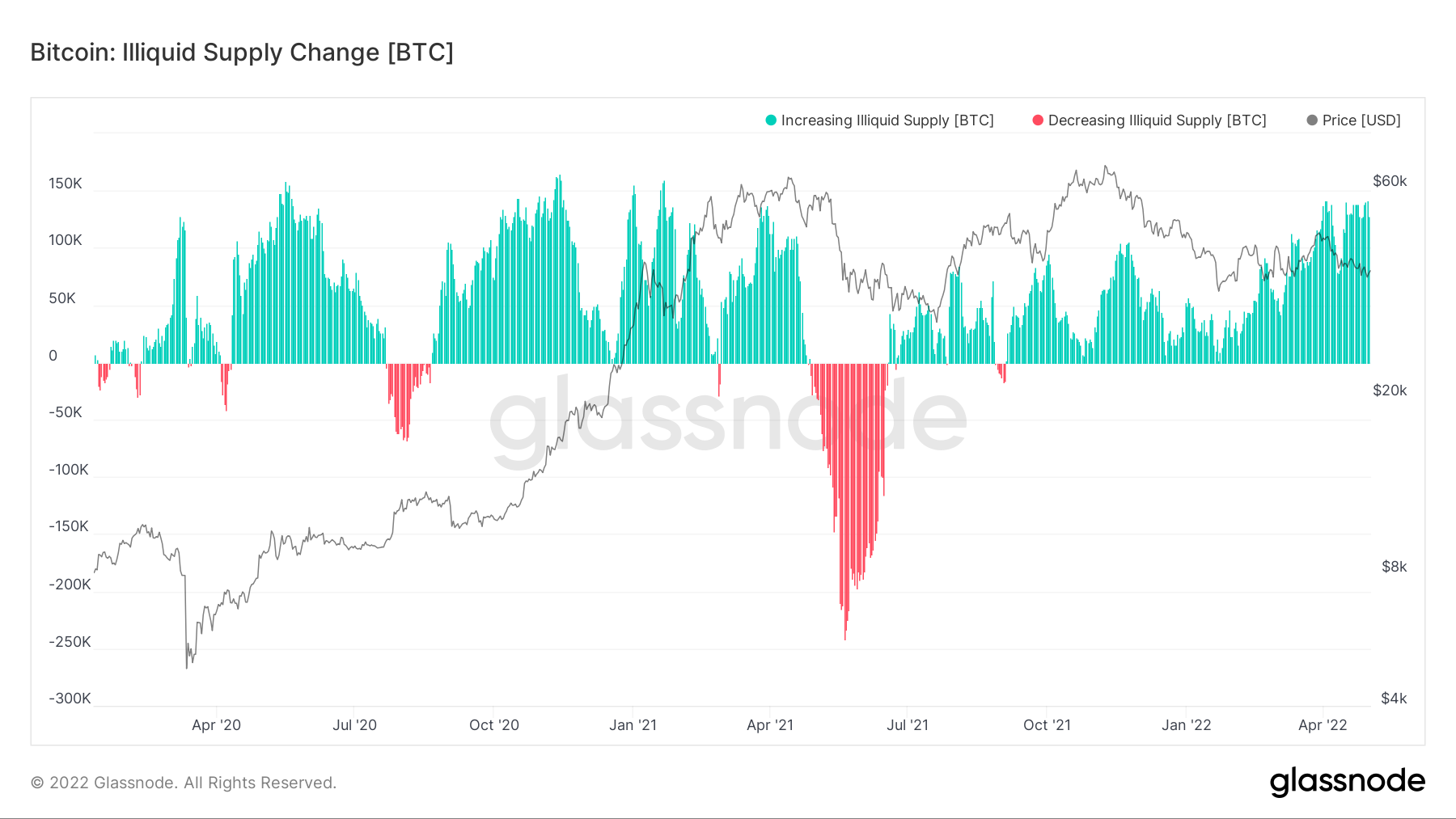 In what could be a silver lining under current circumstances, crypto sentiment is already pointing higher this week, even as traditional market sentiment remains nervous.

Should crypto continue to fulfill its function as a bellwether of market moves to come, there may be modest cause for relief at the data.