The market’s been volatile lately, and that’s just fine for Cathie Wood. The ARK Invest founder, CEO, and ace stock picker is an all-weather shopper for her favorite stocks for her company’s popular exchange-traded funds (ETFs).

What’s she buying these days? ARK Invest added to its positions in Peloton Interactive (NASDAQ: PTON), LivePerson (NASDAQ: LPSN), and Coinbase Global (NASDAQ: COIN) on Monday. Let’s see why she may be on to something with all three stocks. 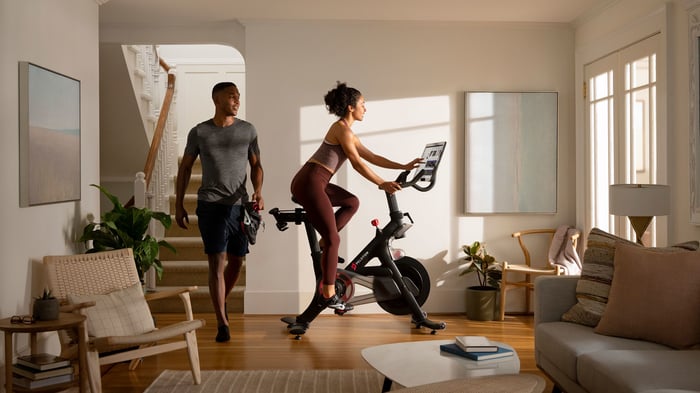 Well-to-do fitness seekers sought out Peloton’s stationary bikes and treadmills during the shelter-in-place phase of the pandemic, but a lot of investors feel the party is over now that local gyms and spinning class boutiques are open again. The stock has plummeted 46% since peaking in January.

The negative sentiment has been percolating since the proliferation of COVID-19-tackling vaccines, but it has also been a particularly cruel past few months for Peloton. Federal subpoenas were presented after a springtime recall stemming from a toddler who had a fatal accident with a Peloton tread and others who reported mishaps. Its latest quarter also left a lot to be desired. Peloton had a rare miss on the bottom line, and its guidance called for weakening sales and profit guidance in part as a result of a big price cut on its flagship bike.

Shares of Peloton are sliding for the fourth consecutive month, but it wasn’t necessarily a dinner bell for Wood. She only added to her Peloton position once this summer. However, she has now bought some more Peloton in back-to-back trading days. Why did she buy more Peloton on Friday and again to kick off this new trading week? Wood offers receipts but not explanations. Given Peloton’s still healthy growth, it could just be a matter of finding the stock’s valuation too tempting to ignore after shedding nearly half of its value over the past eight months.

ARK Invest initiated a position in LivePerson last month, and Wood spent most of August adding to the new position. Monday was the first day in September that she chose to increase her stake.

LivePerson is a provider of online chat support solutions. It went through a rut five years ago when it was updating its platform to address future growth potential. It’s on a roll these days, and 2021 is shaping up to be its fifth consecutive year of accelerating revenue growth.

LivePerson naturally isn’t as out-of-favor as Peloton, but the stock is still 12% below the all-time high it hit back in February. With “beat-and-raise” performances becoming a quarterly occurrence, it’s easy to see why Wood is drawn to LivePerson.

Wood is a big believer in cryptocurrency, so it’s only natural for her to be drawn to Coinbase since it hit the market in April. The leading cryptocurrency trading exchange has ballooned to become the fourth-largest holding across all of ARK Invest’s ETFs, but Wood has actually been buying on the way down. Coinbase would be a much larger part of the portfolio mix if it was trading at her cost basis.

Crypto trading has slowed since its springtime peak, and Coinbase itself has run into some regulatory resistance as it tries to expand its offerings. Cryptocurrency trading is also becoming more competitive. Coinbase is still working on new ways to make its platform more engaging. On Monday it announced that it will soon be allowing accounts to have payroll checks deposited directly into Coinbase. It’s hard to fathom anyone sending all of their paycheck to a trading platform, but you can’t fault Coinbase for aiming high. As it continues to flesh out the types of cryptocurrencies that users can trade on its platform and grow the ways it can reach new users, it’s hard to bet against Coinbase.

10 stocks we like better than LivePerson
When our award-winning analyst team has a stock tip, it can pay to listen. After all, the newsletter they have run for over a decade, Motley Fool Stock Advisor, has tripled the market.*

They just revealed what they believe are the ten best stocks for investors to buy right now… and LivePerson wasn’t one of them! That’s right — they think these 10 stocks are even better buys.