Crypto stocks were some of the best performing names on Tuesday as Bitcoin, the undisputed crypto leader, broke above $50,000 for the first time in a month. Most importantly, Bitcoin appears to have steadied above $50,000. The cryptocurrency has been strong since the Federal Reserve indicated that it had no plans to ban it. This has at least offset some headwinds from the Chinese crackdown on the entire cryptocurrency sector. Bitcoin above $50,00 was a clarion call for the crypto stock sub-sector, and most names duly obliged with some strong moves higher. COIN closed at  $240.09 for a 4.7% gain. MSTS was up 7.21%, RIOT +4.32% and MARA closed up an impressive 10.59%, see more on MARA here.

The strong performance of crypto stocks can be traced back to the October 1 testimony by Federal Reserve Chairman Jerome Powell, who said there were no plans to ban cryptocurrency. This set Bitcoin on a surge, and crypto stocks followed soon after. However, news for COIN was tempered somewhat the same day when Reuters filed a report that hackers had stolen from accounts of at least 6,000 customers of Coinbase Global (COIN). The Reuters report cited a breach notification letter sent to affected customers. Unauthorized third parties exploited a flaw in the company’s SMS account recovery process to gain access to the accounts and transfer funds to crypto wallets not associated with Coinbase, the company said. “We immediately fixed the flaw and have worked with these customers to regain control of their accounts and reimburse them for the funds they lost,” a Coinbase spokesperson said on Friday.

News from Coinbase rival Binance on Tuesday sheds a more positive light with volumes remaining strong and thus erasing fears that a regulatory crackdown would hamper cryptocurrency trading on the Binance platform.  Research for Reuters carried out by Cryptocompare showed trading volumes of $789 billion in September versus $454 billion in July.  Binance did not comment on the story.

The chart now looks a lot healthier following Tuesday’s move and a powerful green candle breaking the recent downtrend. $231 is the point of control since the IPO, meaning the price with the highest amount of volume. Volume means price acceptance and so support. This move needs to break the September 23 high at $245.80 to turn the stock bullish in our opinion. This will take COIN into a lighter volume zone, meaning gains might be easier to sustain. Breaking $245.80 will also get COIN back above the 200-day moving average, and it should also see the Relative Strength Index (RSI) back above 50. Keep an eye also on the Moving Average Convergence Divergence (MACD) that is about to cross over into a bullish zone. 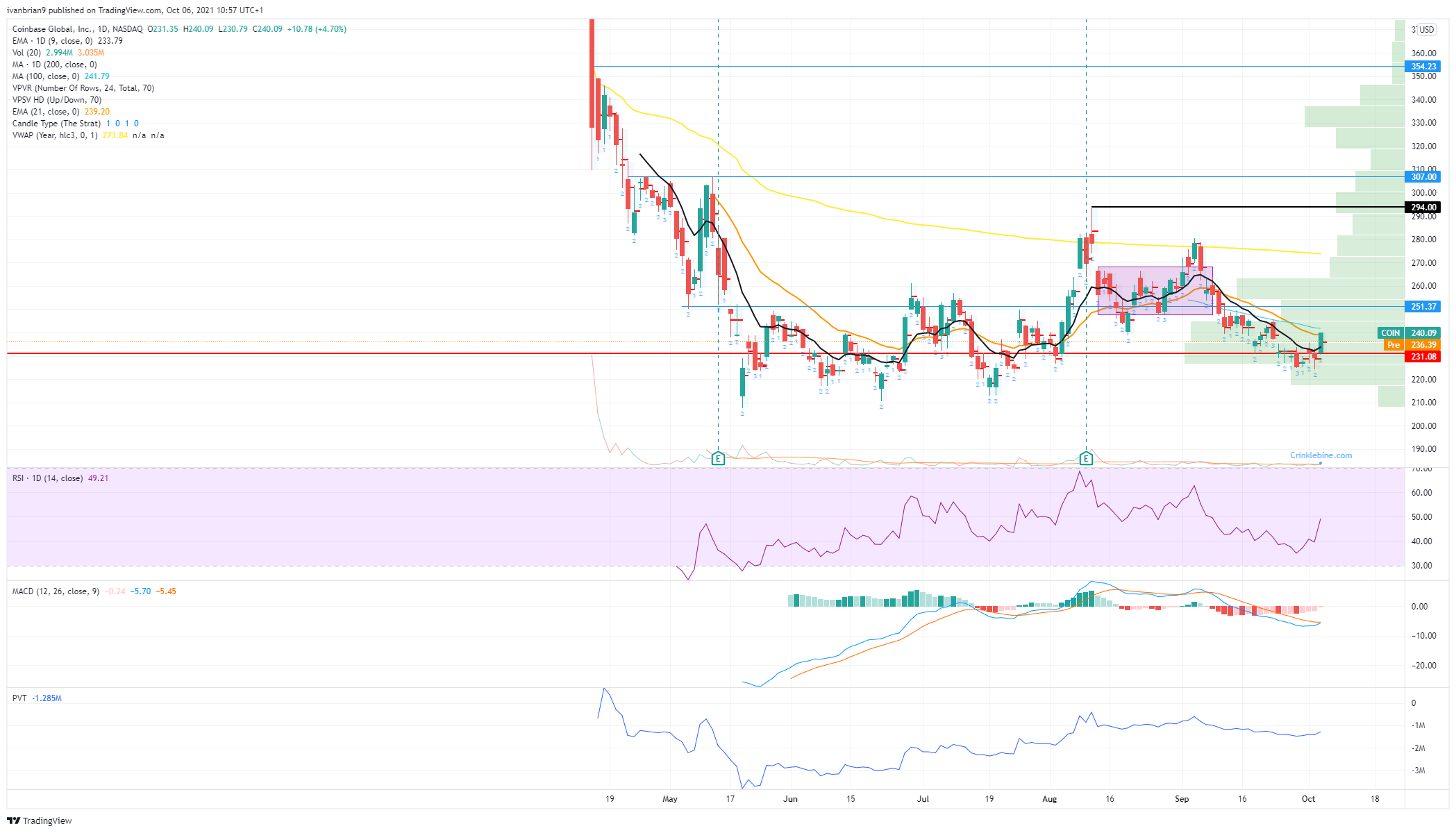 Legislative ‘lifeline’ has doled out $2.6 million in forgivable loans to Northwest Angle businesses so far