Algorand (ALGO) is looking set for a strong upward retracement as the coin consolidates. The altcoin had fallen for two days in a row, and there were fears that a downward spiral could follow. But so far it has stabilized and could be looking for its next rally. Here are the facts: 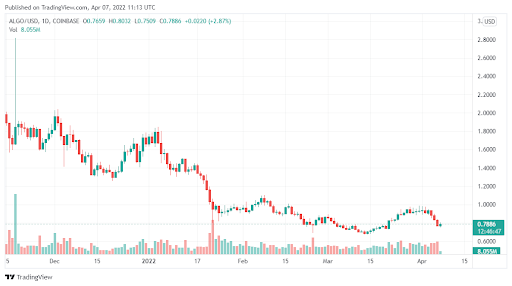 Algorand (ALGO) – The case for an upswing

After showing a bit of weakness at the start of the week, we have seen a strong price consolidation for Algorand. This means that the coin is trying to find demand and as such, it has formed an interesting inverse head and shoulder pattern on the chart.

This typically suggests that a retracement on the upside is possible. When this happens, ALGO could find itself testing $0.9, something that will bring gains of between 17% and 25%. Besides, ALGO still holds important support levels.

Even after the recent downturn, the coin still remains well above $0.76, which is a big plus. As long as bulls hold this support, then the medium-term outlook for ALGO will still remain positive. Also, even if somehow $0.76 is breached, there will still be a case to be made for a rally towards $0.9. This is because ALGO would still be within a crucial demand zone.

How to play the ALGO setup

So far, the outlook is bullish, and there is enough upside for a 17% gain in the near term. So, buying now would still make sense. But for folks who are still not sure, you can wait for the $0.76 support to be breached before entering. It will still be within a good demand zone.