With the recent record institutional capital inflows into crypto, Ethereum (CCC:ETH-USD) should also be a beneficiary, right? 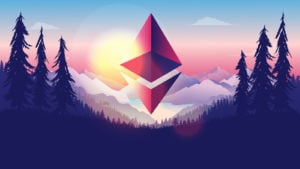 Not necessarily. In fact, that hasn’t been the case at all. And it should raise questions in the minds of ETH pundits.

That’s a big part of the continued conversation regarding bearish sentiment in Ethereum. And that’s an angle worth exploring as general crypto sentiment reaches new highs.

The positive news for the crypto market is that institutional investors pushed a record-breaking $1.47 billion of capital into the market last week. The approval and beginning of trading in the first Bitcoin (CCC:BTC-USD) ETF was largely responsible for catalyzing the movement. In fact, more than $1 billion of that action occurred within its first 24 hours of trading.

The negative news is that not only did Ethereum not benefit from those inflows, it actually experienced an outflow.

In fact, it marked the third straight week in which capital flowed out from ETH. To add insult to injury, oft-mentioned rivals including Solana (CCC:SOL-USD) and Cardano (CCC:ADA-USD) were the other noted beneficiaries of the inflow beyond Bitcoin.

The news seems to really add to the notion that Ethereum’s hold on a dominant position is slipping. Yet, despite the fact that capital flowed out, prices weren’t affected negatively. Instead, Ethereum prices stayed near all-time highs. It comes at a curious time. Ethereum has undertaken what it refers to as the Altair upgrade. That upgrade is a positive note and should keep capital flow news from hurting ETH to any noticeable degree.

The Altair upgrade went live on Oct. 27. It is an important step in the network’s transition toward ETH 2.0.

ETH 2.0 will take the network from one that operates as a Proof-of-Work model to one that operates as a Proof-of-Stake model. The POW model relies on computing power to solve complex mathematical puzzles in order to validate a given transaction. Groups of powerful computers are placed together in order to increase the odds of validating a transaction, i.e., to prove the work.

While there is great money in undertaking this mining, it comes at a cost. Such warehouses filled with mining computers require vast amounts of energy, resulting in an environmental impact.

Proof of stake on the other hand, allows transactional validation based on how many coins a holder controls. Ethereum claims that this switch will result in a 99% reduction in Ethereum’s environmental impact.

That interesting note aside, the Altair upgrade doesn’t bring ETH 2.0 into existence. That transition is expected to occur some time in 2022. The Altair upgrade is the first upgrade to the Beacon Chain, which launched in December of 2020.

This upgrade is essentially the first test of the Beacon Chain as Etehreum moves toward ETH 2.0.

You may be wondering what it means if Ethereum is migrating toward a model in which miners can no longer make money from it. Well, it means exactly that.

That transition won’t happen until 2022 “But if the transition goes smoothly next year, that will also mean that Ethereum mining will no longer generate revenue. Although it’s impossible to predict the future price of any asset, some speculate it may impact the price of ether,” as stated by CNBC.

I see a few reasons to be skeptical of ETH moving forward. First of all, those capital flows figures mentioned above don’t bode well for Ethereum.

However, Ethereum hasn’t been a beneficiary of those institutional capital inflows. That should give investors pause.

Further, Ethereum plans to disincentivize mining at some point next year. That won’t help demand either. Ethereum needs to upgrade because its fees are high, and its speed is lagging. But I don’t see that much positive coming from recent news. For now, I would stay away.

On the date of publication, Alex Sirois did not have (either directly or indirectly) any positions in the securities mentioned in this article. The opinions expressed in this article are those of the writer, subject to the InvestorPlace.com Publishing Guidelines.

Alex Sirois is a freelance contributor to InvestorPlace whose personal stock investing style is focused on long-term, buy-and-hold, wealth-building stock picks. Having worked in several industries from e-commerce to translation to education and utilizing his MBA from George Washington University, he brings a diverse set of skills through which he filters his writing.

The post Alarm Bells Ring as Capital Flows Out of Ethereum in Strong Times appeared first on InvestorPlace.