Profit-taking by bitcoin holders has been reversed, says analyst.

There is no indication of a bear market, as long-term holders continue to accumulate.

In his first market prediction bulletin for 2022, the well-known analyst Willy Woo states that long-term holders are in a zone of maximum accumulation of bitcoin, which allows to infer that there is currently a bullish structure in the market. There are indications that speculative traders have switched roles and are buying BTC rather than selling, the analyst notes.

Long-term holders (LTH), those who have held BTC for more than five months, control most of the currency. “These holders took profits during the heavy sales in December, but have stopped selling in the last two weeks,” the report said.

The following graph shows the LTH supply shock, which is associated with the demand for BTC from this segment of holders. The previous demand peaks indicated in the graph correspond to the downturn after the 2017-2018 upward cycle and around the fall of March 2020. In both cases, accumulation peaks were preceded by strong bullish periods. 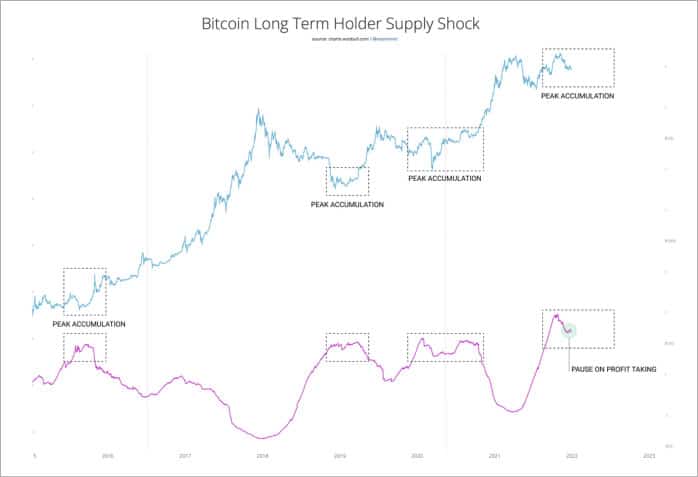 The spikes of accumulation of bitcoin precede a strong bullish phase of the price. Source: charts.woobull.com.

It is also highlighted in the graph, that the decline in demand in December, which corresponded to BTC sales by LTHs, is currently reversing.

“The market structure is vulnerable to downturns when long-term holders are at a minimum of accumulation. This is not the case at present, therefore I would say that a strongly bullish first quarter of 2022 awaits us, ”says Willy Woo.

Another metric on the demand for BTC that the report highlights is the strength of accumulation by so-called retail investors, those with a total of less than 1 BTC. “This metric is crucial because bull markets end when these retail holders stop buying. Currently, the demand from retailers remains strong; they are taking the opportunity to buy at current prices, ”says Woo.

As hodlers continue to hold onto their BTC, speculative traders who made heavy sales in December show signs that they are changing their role; they have now started buying, the study claims. “This is in line with the expectations of the hedge funds, which sold in December to take a profit, and which are now redeploying their capital,” says the analyst. 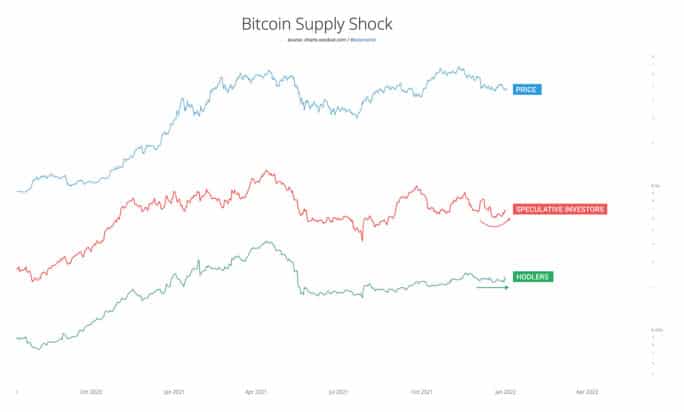 Shock in the supply of hodlers and speculators. Source: charts.woobull.com.

The graph shows that, while hodlers (green) keep their BTC, speculative investors (light blue) have stopped selling and have restarted the acquisition of BTC.

In the BTC hodlers trading heatmap below, the blue circles represent purchases and the red circles are sales indicators. The current situation is relatively neutral, the report states. “Perhaps the most noticeable of the current situation is that the large red circles that indicate a cascade of sales do not appear, which was seen in May 2021 and led to an extended bearish stage”, highlights the investigation.

BTC inflows and outflows from exchanges

Regarding the inflows and outflows of BTC from exchanges, the report adopts a somewhat cautious attitude, as there is no clear definition of the determining direction of the flow.

Outgoing flows increased significantly in early August 2021 and also in September. Both outgoing BTC movements preceded ascending phases of the BTC price as shown in the chart below. 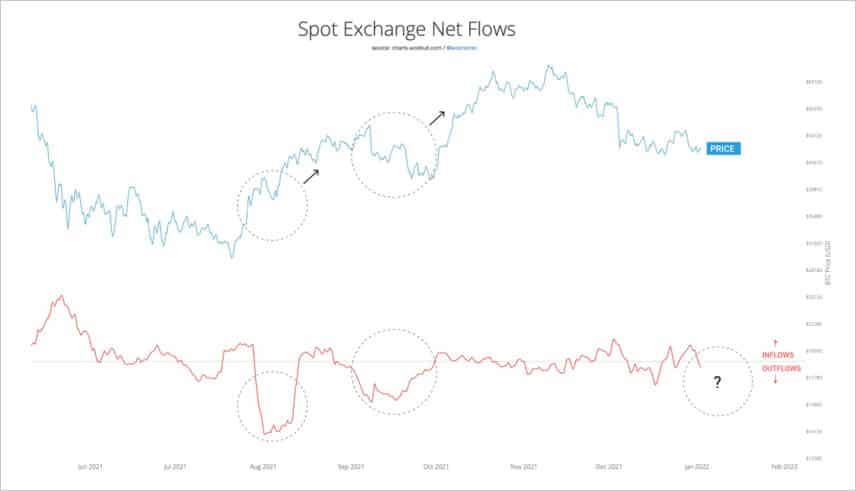 At present, although inventories have been decreasing, the flows are in a zone of neutrality, as can be seen in the graph. “We still don’t see the big push out of BTC that precedes a buying boom. We are in the waiting phase of this game, “says the report.

A metric that would confirm that we are about to enter a significant increase in demand is the so-called NVT, which compares the market capitalization of bitcoin with the daily volume that investors move. 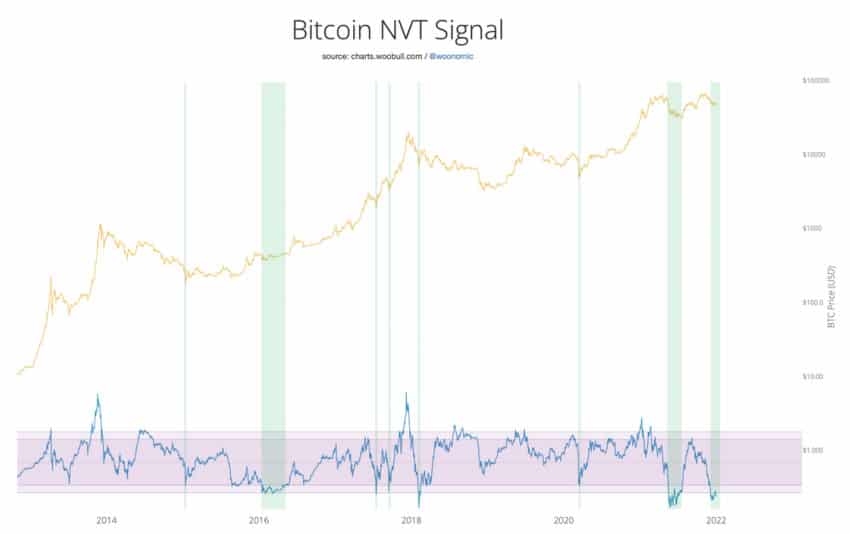 The NVT metric measures the relationship between the market value of BTC and the daily volume. Source: charts.woobull.com.

As seen in the chart above, the bands shaded in light blue correspond to lows of the NVT parameter, which have also occurred prior to a bullish breakout.

Since the NVT reaches a minimum, it follows that the volume traded in the penultimate days, which is associated with investor activity around BTC, is at maximum valuessays the report.

Despite the fall in the price of BTC last November and December, bitcoin closed the year 2021 with an appreciation of 60%, which doubled in appreciation of traditional assets, as published by CriptoNoticias. The BTC held by long and short-term holders represented, at the end of 2021, 86.45% of BTC circulating; about 13.3 million BTC. On the other hand, the coins held on the exchanges ended the year at 2.56 million BTC.

Bulli Bai: India app that put Muslim women up for sale is shut